ProdID: 7791 - Blade of the Immortal
Directed by Takashi Miike 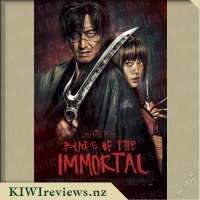 Disclosure StatementFULL DISCLOSURE: A number of units of this product have, at some time, been supplied to KIWIreviews by the company for the purposes of unbiased, independent reviews. No fee was accepted by KIWIreviews or the reviewers themselves - these are genuine, unpaid consumer reviews.
Available:
in cinemas November 2017

Blade of the Immortal product reviews

Cursed with immortality, a highly skilled samurai in feudal Japan promises to help a young woman avenge the death of her parents. Their mission leads them into a bloody battle with a ruthless warrior and his band of master swordsmen.

Many of the younger generation are well aware of Matt Groening's animated TV series Futurama. Most of which would also remember the 'Parasites Lost', the episode where Fry eats a decaying egg salad sandwich from a vending machine at a truck stop, and ends up with microscopic worms that heal his body against injuries and illness, eventually improving his physique and giving him superior strength. Blade of the Immortal is effectively that storyline, reimagined in a style similar to Quentin Tarantino's 'Kill Bill' movie series, starring a copy of Marvel's Wolverine.

While reasonably entertaining to watch, there are several aspects of the film that let down the film; the skills of the main character Manji, the quantity and quality of the enemies, and the climax of the film.

Manji is a "highly skilled samurai", and we see great examples of this in the opening scene. Unfortunately from that point on, he shows few further examples of his great skills. He certainly does create a large body count, but it wouldn't necessarily be thought of as skillful especially considering every major villain that he encounters manages to beat him, dealing a death blow, and Manji is only ever saved by the fact that he is immortal.

The villains were also an unfortunate addition to the film. While initially we were treated with new, original ideas on villains, who had interesting aesthetics and different fighting styles, the original lineup introduced at the start of the film appeared to have been a misdirection. There was no real set number of bad guys that needed to be defeated. Instead, the protagonists end up on the receiving end of an endless barrage of forgettable, expendable enemies. The first two or three battles had you on the edge of your seat, but soon you become aware of the extent of Manji's immortality, and the level of threat drops considerably.

The climax I won't go into as it will spoil the ending, but needless to say, things don't go as planned, and while it created an ending that wasn't necessarily predictable, you lost a large chunk of the minimal character development that occurred during the film.

The film itself has desaturated colours, that provide a more authentic eastern feel, juxtaposing the usual high saturation of Hollywood films. While not necessarily to the extent of a Tarantino film, there is no aversion to the use of blood and gore in this film, and it creates something that will likely appeal to the young adult demographic. An action packed film, but not something that would really hold interest over multiple viewings.

From the creators of Shrek and Madagascar comes the funniest movie of the year.

Prepare for awesomeness with Dreamworks Animation's Kung Fu Panda. Jack Black is perfect as the voice of Po, a noodle-slurping dreamer who must embrace his true self - fuzzy flaws and all - in order to become the legendary Dragon ... more...