ProdID: 7518 - Guardians of the Galaxy Vol. 2
Directed by James Gunn 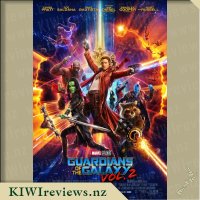 Disclosure StatementFULL DISCLOSURE: A number of units of this product have, at some time, been supplied to KIWIreviews by the company for the purposes of unbiased, independent reviews. No fee was accepted by KIWIreviews or the reviewers themselves - these are genuine, unpaid consumer reviews.
Available:
in cinemas 25 April 2017

The team struggles to keep its newfound family together as it tries to unravel the mystery of Peter Quill's true parentage in the outer reaches of the galaxy.

Disclaimer: I saw and loved the first film. I tend to see most of the superhero films at the cinema so I am probably a bit harsh and critical if you are just looking for some light space fun.

I and my other half have been waiting for this to be released - and there has been a lot of hype so expectation was quite high. The first film was a bit of a surprise success and they have definitely taken all the bits that sold well and done more of them. The intro sequence in the 1970s is very well done and adds a certain initial lightness that the intro sequence in the first film did not. I am pleased to say in general there is much more lightness in this film and the characters could probably appeal to a younger audience that the first... but I have no kids so no real idea on this one. I will however be taking my 14 year old niece to it (on request).

One of our group of 5 had not seen the first film and was just using the media hype from the first and second to fill in the gaps "awww groot is cute" but missed a lot of the jokes that referred to the first film. The bringing back of the main elements of the first film makes it feel like a true sequel and the "search for his dad" element is very well played out (I have never seen two grown men play catch which such earnestness and concludes nicely at the end of the film.

Each of the characters is almost a cheesier version of themselves from the first film (and the new characters aren't particularly complex). They are definitely going for the laughs and some of the exchanges come off a little false and forced but they manage to add the new characters successfully, especially the empath who adds an innocence that is missing as groot is clearly a comic relief character now. It is strange that in a space comedy that there is a comic relief need but it sort of works...

The music (which is a key part of the first film) is quite heavily overstated in a lot of places - but that sort of works for the cheesy feel they are going for. I think I will probably get the soundtrack to go with Awesome Mix 1 but not sure how much playing it will get in comparison as the retro song trend may have passed...

In conclusion, it is a worthy sequel if you love the world and want to visit but not a great movie on its own and not for those who have not seen, remembered and loved the first film. Guardians of the Galaxy Vol. 2 has been a long time in the making; at least when you take hype into consideration. The first movie was such an overwhelming success, especially for a lesser known group of characters that all needed to be introduced and fleshed out, before a story can be properly engaged with. With the bar set so high by its predecessor, and the high level of media coverage if you follow the superhero genres on social media, hype will be the huge obstacle for the sequel to overcome.

Now let's temper the hype machine by saying straight out of the gate that I don't feel it is as great as the original. It is good, don't get me wrong, but the focus was in the wrong place. Guardians of the Galaxy Vol. 2 has one main story arc based around the parentage of Chris Pratt's character Peter Quill (Starlord), a story line that was hinted at, at the end of the first Guardians of the Galaxy movie. There are also three other sub-stories revolving around the character development of Rocket, Yondu, and Gamora & Nebula. What this does mean is that Groot (voiced by Vin Diesel) and Drax the Destroyer (portrayed by Dave Bautista) really have little effect on the plots beyond being a couple of extra hands, and a source of hilarity.

The opening scene of the film brings us to the Guardians of the Galaxy right before a battle, which we then barely get to see any of, as Groot steals the spotlight and becomes the focus for the majority of said battle. While it provides a few laughs and awws (Baby Groot is indeed adorable), it sets the tone for the whole film in a way that makes us feel like these characters are incompetent but indestructible, and struggle to see any further enemies in the film as an actual credible threat.

Guardians of the Galaxy Vol. 2 has a plethora of laugh-out-loud moments, but it has so many that after a while you became very aware of parts of the film that lacked comedy, as it had suddenly become the thing that was keeping you engaged with the plot; waiting for the slap-stick humour. Perhaps the comedy was necessary to try and balance the plot, as the content is surprisingly dark for a Marvel film (which often cater to younger audiences than competitor DC's films). Yondu's story arc specifically is quite heart-wrenching at times.

With 5 end credit scenes, Stan Lee cameos, and a primary focus on the comedic element of the characters, it felt like a film full of moments, without proper content in the scenes connecting them together. There were times when the scene ended and we returned to see the progress of other characters and it was a surprise because I had forgotten about the other characters; their plot line ceased in our minds, not long after they left the screen.

Guardians of the Galaxy Vol. 2 had plenty of great aspects to it; the creativity of Rocket's munitions and his tactical brilliance was an art in itself and a pleasure to watch. The character development of Yondu brought much needed depth to the character, even if it was a little cheesy at times. I did find a lot of the dialogue felt forced, and wasn't coming across as organic conversation, which again seemed to repeat itself a lot, or spend too much time on a single punch line.

The real stand out character in Guardians of the Galaxy Vol. 2 however, was newcomer Mantis. Pom Klementieff does a brilliant job bringing the character to life in a convincing way. Her make-up/SFX were convincing too; you compare Mantis to Pom, and you can't even tell that it is the same person. Other visual environments were exquisite, and well rendered, though the primary setting of the movie did come across a little bit garish. Very bright colours in the capital, though the outer reaches have a much more realistic, and dull tone to them.

I enjoyed the film, but with no real connection to the major Infinity War storyline, I was hoping for a strong storyline with some really genuine character development. I felt underwhelmed in that sense, but I was still thoroughly entertained, even if it was in more of a "Saturday night popcorn" film kind of way.

Captured over five years as part of the Localising Food Project, Edible Paradise shares the dream of greening post-quake Canterbury by saving valuable heritage fruit and nut varieties from the bulldozers.

The project tries to ensure that genetic diversity, medical benefits and historic links will remain available to future generations.