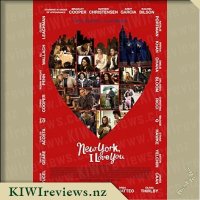 New York, I Love You is a 2008 American romantic comedy-drama anthology consisting of eleven short films, each by a different director. The short films all relate in some way to the subject of love, and are set among the five boroughs of New York City.

The film is a sequel of sorts to the 2006 film Paris, je t'aime, which had the same structure, and is the second film in the Cities of Love franchise, created and produced by Emmanuel Benbihy. Unlike Paris, je t'aime, the short films of New York, I Love You all have a unifying thread, of a videographer who films the other characters.

It was one of those nights and I didn't really feel like watching anything that I needed to give any real concentration to nor a lot of thought into. I had Netflix on, and after browsing for a little bit, settled on 'I Love You, New York' as it looked like it might be a nice film. Well,I got to the end of the film and I would be quite happy to never have to see this movie again, in fact the only part that I did like in this film... the final clip, all the rest just didn't feel quite right nor real.

The stories aren't all particularly awful, and there was one or two that I thought were OK, I just didn't feel anything particularly for anyone. There are a lot of big names in this film, I recognized at least 90% of the main actors but their performance didn't thrill me, didn't make me want more and so this film easily falls into the trash pile of 'never again!' The one thing I did like, as I said above, came right at the end, I would happily watch it again and again. It features an elderly couple going on a walk, and their conversation is both funny and realistic, to the point where it reminded me 100% of my grandparents.

The end clip made up for the failure of a film, but I'm never watching this movie again.

Set a course for a galaxy of unparalleled action and adventure as Captain Jean-Luc Picard (Patrick Stewart) and his crew battle a chilling new adversary... that just happens to hold a shocking link to Picard!