« The House of Magic review 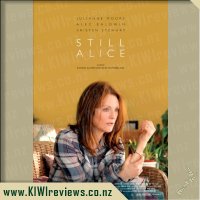 Alice Howland (Julianne Moore), happily married with three grown children, is a renowned linguistics professor who starts to forget words. When she receives a diagnosis of early-onset Alzheimer's disease, Alice and her family find their bonds thoroughly tested. Her struggle to stay connected to who she once was is frightening, heart-breaking and inspiring.

After adjusting to the intense camera shots and fighting back the tears I found this movie so emotional and compelling. The casting can not be faulted nor could the story. The acting was brilliant and right on point. To watch a once capable woman turn into a shadow of herself is both terrifying and amazing to see. This has to be the worst disease to have as on the shell you look the same but inside your brain is turning into cottage cheese and it is a battle that you yourself know you will inevitably lose - even Alice commented that she would rather have an uncurable cancer than this. Although no time line was really ever mentioned it all seemed to happen so fast which is extremely scary. I myself would hate to have to live with this or anyone close to me.

My nanas sisters husband also has this terrible disease. A lovely caring man now is like an infant who does not know his own strength and fights out at his desperation and fear. Now in a home it is devastating to the family as on some days he is fine and remembers everything and on others he does not know you or anyone and it is tearing my nanas sister apart. My nanas best friend has also had for the past fifteen or so years and now just sits in a chair staring out into space and does not even have good days anymore. It is just so unfair.

The movie takes you from a highly succesful teacher giving speaches to forgetting the odd word here and there to basically losing her own voice. I wanted there to be a happy ending and felt rather upset when it just ended with no resolution at all. I was cheering for her as she painstakingly went up and down the stairs to take a few pills and was left reeling when interrupted. It is definitely no life for the victim or the family.

I think the most powerful moment in the film is when Kristen Stewart asked her how it feels and Alice replies that she 'used to be known for her intellect and was defined by her way of speaking and now she can see the words she wants to use right in front of her but can not grab them and her biggest fear is what will she lose next'. This movie explained so much in such unexpected ways. I had tears in my eyes as she found out she had unknownly passed the disease on to one of her children. I was hoping for just a glimmer of good news for this poor family.

definitely worth the watch. I don't think I could personally watch again because of the topic but I have already recommended it to a couple of people as I think it is definitely worth seeing. But I have given it a ten as it deserves full marks.

Still Alice is a simply amazing, heart wrenching and very real story of a gorgeous young woman's life and the battles she goes through with Alzheimer's disease. When I saw that this film was up for review I immediately was interested to see it, I was reminded instantly of my late grandmother who had the same disease which eventually was the cause of her death. I very much doubted my husband would be interested in this movie and was quite surprised, when after reading the blurb on the back of the DVD he settled himself onto the couch to watch this movie as well. His words at the end summed up the reality of how realistic this film really was "wow, that was such an incredibly sad movie. What a terrible disease."

The movie sets the scene of Alice having Alzheimer's disease from the get go - Alice is forgetting words in the middle of her lectures and while out running completely forgets where she is and gets lost. Having a grandmother who had this disease I recognised the signs and found the acting and scene set of this movie completely real like and believable. It drew me into the movie and Alice's life immediately. The cast of well known actors including an Oscar winner definitely attributed to the fabulous acting which of course made this entire movie. Alice was a beautiful woman who was a linguistics professor at a university, the speech she gives about how Alzheimer's changed her life really hit home to me, perhaps because I am a teacher myself (although nowhere near the same level). It was at this point that I turned to my husband and said "dam I hope I never get this, I couldn't handle what you would go through".

I was completely drawn into this movie the entire time and felt like I was there myself apart of Alice's life. I will even admit that yes I had tears! Seriously, that never happens for me - I'm not a cry because of something in a movie type but this hit straight to my heart. Perhaps the personal link of my grandmother dying from this disease had something to do with it, however I was so engrossed in the movie that it wasn't until after it had finished that I really thought of her and her life as opposed to Alice's. Alice's family life was interesting and had it's own set of drama's - with grown children who didn't see eye to eye and a husband who I felt left her side way before he should have. I will say I was quite disappointed with the ending of this film, but then I quite often am and as my husband said "it has to end somewhere dear"... I will leave it up to you to watch the film and see what you all think

All in all I really don't have the words to give this film the recognition it deserves. Beautiful heartfelt and real acting matched with stunning set's meant for a perfectly captivating film that had me wanting to watch more when it had finished. I would pay to see this film again in a heartbeat and totally recommend it to everyone to watch!

Before there was Amityville, there was Harrisville. "The Conjuring" tells the true story of Ed and Lorraine Warren (Patrick Wilson, Vera Farmiga), world renowned paranormal investigators, who were called to help a family terrorized by a dark presence in a secluded farmhouse. Forced to confront a powerful demonic entity, the Warrens find themselves caught in the most horrifying case of their lives