ProdID: 6008 - Indiana Jones and the Temple of Doom
Directed by Steven Speilberg 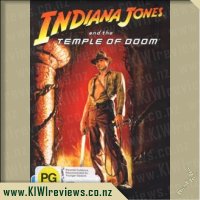 Indiana Jones and the Temple of Doom product reviews

The second of the Lucas/Spielberg Indiana Jones epics is set a year or so before the events in Raiders of the Lost Ark. Indy needs to retrieve a precious gem and several kidnapped young boys on behalf of a remote East Indian village. This time he teams up with a night club singer and a 12-year old boy.

I didn't actually know until literally just a couple of minutes ago, that this film is actually a prequel to "Raiders of the Lost Ark", though that does finally answer my question of why no Marion...

I always wondered why she wasn't in this film.

We meet Indiana as when he is in Asia trying to get his hands on a precious gem, he ends up stranded in India with his helper, Short Round and a night club singer, Willie. I loved Short Round and had always wished that he had been in the following movie, I would have loved to have seen more of him, wish we knew where he had ended up. Willie, well... Willie drove me crazy, I mean really, why the heck did she have to scream and whimper at everything, bring back the strong, won't take no crap Marion please.

The plot is ok, though I didn't enjoy it as much as the first. Indiana Jones ends up promising to help a small Indian village who has had their magic stones stolen (which has resulted in everything dying) and all their children have been abducted (as we find out to be being used as slave labor). There are some fun moments but as a whole this is my third favorite in the series of Indiana Jones movies.

The second installment of the original Indiana Jones trilogy, and this one was a bit annoying to me, but only because of the night club singer's character. She screams at everything, complains constantly, and cares about nothing but jewellery, gold, and finding a rich man to marry. While I can understand the screaming and complaining (Really, who wouldn't be if they ended up in the Indian jungle), but overall the character just really ruined the film for me.

Unlike the prior film, which focused more on the race to solve the riddles and beat the Nazis to the item, this film, was much slower, and did not really require any such knowledge or experience to complete. It was just pure luck that got Indy through the challenges. The extent of the "magic" and supernatural energy was very over the top, and while enjoyable to watch, it failed to make the film believable. Once we got to the point where people were getting brainwashed, I kind of switched off my brain.

Again the CGI, and props were very obvious, but for the most part it didn't detract from the film. While not my favourite of the Indian Jones franchise, it still beats the fourth film.