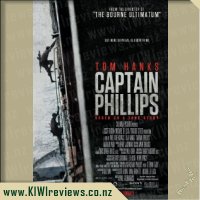 The true story of Captain Richard Phillips and the 2009 hijacking by Somali pirates of the US-flagged MV Maersk Alabama, the first American cargo ship to be hijacked in two hundred years.

The chilling true story about a Container Ship that got hijacked by Somali pirates. Tom Hanks proves again why he is considered one of the best actors of all time. Although it takes a while for him to really get into the role. The end will forever stay with me, the raw emotion that he shows had me in tears, you could feel the true terror and feel the shock of the whole situation hit him in those last few moments - a truly gifted actor.

This movie starts of rather slow and takes a while before you get really involved with the characters, the ending is so suspenseful I have never been so gripped by a movie before. I knew that he survives the ordeal but what he had to go through and the suspense of the rescue attempt is thrilling. When this happened in 2009, I had heard that a captain had been taken captive after their ploy to steal the container ship went south, and then heard that he was ok, but I did not know the true depths of what he had to endure.

The American Navy Seals snipers are truly amazing to take those one in a million shots. Although, like any American movie you are not sure what is actually truth and what is made up but if it went down like this movie states they all deserve medals.

One thing I hated though were the subtitles they are so small and change so fast that you end up missing a lot of what dialogue was going on. We paused to begin with, but in the end gave up and took our chances. You could kinda tell by the body language, the tones of there voice and the first couple of words that I managed to read as to what was going on so didn't miss a lot (I hope). Although at the end when it tells you what happened to the 'pirate' and 'Captain Phillips' it was so hard to read had to get off the couch (much to my cats annoyance) to read what had happened. With the vast amount of people (probably going to watch this) being the older generation with poor eyesight, you would think they would make the font larger or at least not as fast moving.

A truly captivating movie and Tom Hanks deserved the nominations he received for his part.

Margaret Mahy is famous for her children's and young adult books and has received many literary accolades including the Hans Christian Andersen Award in 2006 - the ... more...