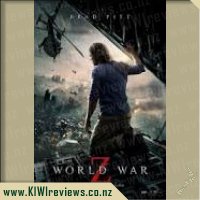 Life for former United Nations investigator Gerry Lane and his family seems content. Suddenly, the world is plagued by a mysterious infection turning whole human populations into rampaging mindless zombies. After barely escaping the chaos, Lane is persuaded to go on a mission to investigate this disease. What follows is a perilous trek around the world where Lane must brave horrific dangers and long odds to find answers before human civilization falls.

My husband had been bugging me about watching this and kept on wanting to borrow it from the video store but we finally remembered to ask if we could borrow it from my dad, therefore saving us money and my husband finally got his wish.

This is yet another zombie movie, so if you are sick and tired of the things, stay well clear, if you are still enjoying them, then sit down and have a watch of World War Z. Pitt plays Gerry Lane, a united nations ambassador who ends up having to try and help find a solution to this new, devastating disease that turns people into "zombies" within seconds, literally, seconds. The plot, though, leaves a few plot holes, such as if Gerry has had that much experience going into situations where he has to be quiet, then how the hell does he mess up that badly?

The acting is good, your general Brad Pitt acting, the special effects are really what make the movie and if it weren't for the special effects then this wouldn't have been much of a movie at all. My favorite part of this has to be seeing Peter Capaldi in it, especially considering his future role and being billed as W.H.O. Doctor. :P All in all, not a bad movie but not the best zombie movie I've seen either.

Can someone remind me in the case of a Zombie Apocalypse, to stay away from Brad Pitt. He is one of the most reckless parents I have ever seen, and should have died many times in the film. The only part of this movie that truly shocked was in the opening scene, before the threat was known, and that just came in the form of a truck (you'll know it when you see it).

The zombies themselves have become far more than an infected human being. In this film, they rapidly become a deranged superhuman creature that are capable of working together. This really changed the film for me. This isn't a zombie film. This is a werewolf film, but the werewolves look like zombies. Moving super fast, with a unnatural jumping ability, and able to infect, kill, and turn people in mere seconds, makes this film hard to stomach.

While it was interesting to see different methods of dealing with a zombie outbreak, it was ultimately not believable, and I felt myself boring of the film. The solution to the threat was a creative one, but the way that it was discovered was poorly written.

The plot in itself was extreme; globetrotting while fighting a zombie invasion, and it failed to thrill me. The constant screams made me flinch in sympathy for my ears. I really expected more from Brad Pitt.

Watching this movie was different than what I was expecting as it seems like the title doesn't really give you a clear picture of what this movie is about. For zombie movies I have found this to be a similar plot to "Shaun of the Dead" when the good guys try to kill the zombies before they get turned themselves. But I found some parts of it where it did turn into a bit of a thriller or to much shooting or running that didn't fit into the movie itself as it took the focus away and making it hard to focus on the vital parts that people needed to know to be able to follow the plot.

During this movie it seems like it different than any other movies that other people have released before. With the zombies in this movie they don't just stay together, they spread around, Biting healthy living people to be able to spread there disease around. It takes around 12 seconds for the disease to spread around the persons body for it to be able to be a zombie. I found some things unbelievable in this movie that zombies has super strength and speed where it seems like the human race doesn't stand a chance.

Personally I wont watch this movie again as it seemed boring or went to off the plot too many times. I wont let anyone under the age of 16 watch this as it is a very violent movie with fighting, Shooting and blood or the scare of the zombies as well. It isn't believable this movie, with it dragging on all the time it one that seems very boring to watch.

Watching all of the Zombie programmes lately I think they need to make a template of what a zombie is and what it is capable of. We all know that Warewolves change during the fall moon and that Vampires burn with sunlight, unless of course its Twilight then they just shine. But basically a vampire is the living dead and sucks your blood.

Now with zombies this is where it gets tricky: Some movies they only want your brains where as others that just don't care what part of the body it is they just want to eat you. Then there is the question of dying or possibly changing - some take 24 hours and some can take a couple of minutes. Then there is the big mystery how will they walk?? Will it be like Night of the Living Dead where they walk around with there arms out stretched saying Brains. Or will they walk around aimlessly looking for their next meal like The Walking Dead or will it be like this movie?

In this movie it takes 12 seconds from the time that someone is bitten to to the time that they change. After a fit of jumping around on the ground they are up and running with super speed. No one stands a chance.

The other thing I find interesting with zombie movies is how will the human race react. Will it be like this movie that as soon as the zombie appear people are looting the shops and shooting each other or will we band together and kick some zombie butt. I would like the think it is the latter - I hate the way people act on the Walking Dead fighting between ourselves and killing each other instead of working together.

This movie I felt dragged on to long. The action scenes with the zombie scenes just went on and on - there is only so much running you can watch before you start to get bored. The zombie working together as a team jumping on each other was really clever but then you spend ten minutes watching them chase people. Instead of watching it we ended up talking between ourselves because it was just zombies attacking. Brad Pitt was ok in the movie but there really is only so much you can do. It could of been so much more.