« Islands on The Edge review

Chelsea Winter, At My Table review 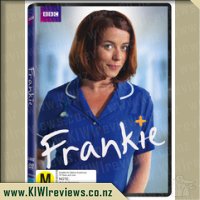 Frankie is a heart-warming, funny and ultimately life-affirming six part series set in the challenging and complex world of district nursing.

A heroine for the modern age, district nurse Frankie Maddox looks life and death in the eye on a daily basis; her mission is to make a difference. Frankie is an infectious character, she's electric and quirky, absolutely wonderful at her job and adapts to every situation life and work can throw at her as she tries to live in the fast lane and juggle her work at the same time. This heartwarming and funny series follows Frankie and her eclectic team as they visit their patients at home and takes a look at ordinary lives, which are often in huge domestic crises.

The nurses enjoy their work; it may infuriate, frustrate and even bore them at times, but they turn up day in and day out and wouldn't choose to do anything else - even when missed birthday parties and emotionally neglected kids are the order of the day. All that matters, whatever their flaws, is that they do a good day's work, and make life better for their patients.

Orange is the New Black: Season One
Rating: 9.6

The series moved at a slow and comfortable pace. We got to know the characters and begin to identify with them as we progressed through the six episodes in the series. I found I developed a certain amount of investment in the characters and the storyline and looked forward to getting a spare hour to sit down and watch the next episode.

From the early episodes of the six part series, I found that I really enjoyed Frankie's character. The more I saw, the more I liked her. As a viewer, I felt like I wanted to be a bit like her. She was a full of energy person who was willing to put the rules aside in order to look after the people in her care. She added a sense of humour to the treatment of her patients and this often helped them to deal with the physical and emotional ailments that they have been struck with. As the series moved on, we started to see some of her workmates displaying the same sort of care. It shows that if one person has the right sort of attitude, it can spread throughout a workplace. This was in contrast to the beginning of the episodes where we saw the staff sitting on a break and not too keen on becoming involved in Frankie's problem solving of a patient's situation.

In the beginning episodes we saw Frankie's character switch easily from work life to her energetic and happy character at home with her partner Ian. Her personality quietened down somewhat when relationship issues developed. From that point on there was a loss of sparkle in her. She still carried on with work but it is obvious that something is missing. We did get to see her energy come back from time to time in the form of her infectious smile, eagerness to help people and her crazy dancing.

The series brought up many topical issues like unplanned pregnancy, disabilities, cancer, death, stalking, cheating and parenting. These are all real things that happen to real people and I think that it why the series was so interesting to me. Viewers can relate to the characters and the situations.

I loved the time lapse photography as the scenes move from night to day and visa versa. Apart from that, the filming was nice and simple and I think that that made the time lapse parts stand out nicely.

The series explored many different characters and the relationships they have with each other. This involves relationships between the staff, and with their patients. We got to see that even though they staff were all there to do the same job. they all had their own individual issues to deal with. As with real life, the people who see to be the toughest people are the ones with the biggest problems. Even though we know this, we were in for a bit of a surprise at the end. I think it was a powerful scene at the end of the six episodes and forgiveness and support were vital to the happiness and wellbeing of one of the characters.

Frankie's red car become a bit of an icon throughout the episodes. We got to see it regularly as she went out on her visits to patients. I am hoping that there might be a follow-up series of Frankie and I can see the red car off on it's next journey.