Islands on The Edge review 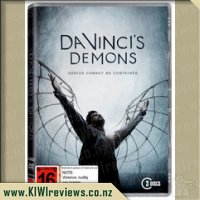 Brilliant and passionate, the 25 year old Leonardo da Vinci (Tom Riley - Lost in Austen) is gifted with visionary intellect and almost superhuman talents. When a chance meeting with a mysterious stranger throws his world into turmoil, he and his companions find themselves in the midst of a storm that's been brewing for centuries; a conflict of truth and lies, religion and reason, past and future. Set against the backdrop of Renaissance Florence, this stylish, seductive and powerful series reveals the secret history of the world's greatest genius in a compelling adventure of love, lust, mystery, power and a fight for the truth.

I was intrigued by Da Vinci's demons as before it even aired there was a great big billboard advertising it outside my local mall, and then there was the trailer, so we jumped onto Sky and set it to record.

This TV series is set in the time of Da Vinci, in Florence, and follows Da Vinci as he uncovers more about his mother (of whom he knows almost nothing of, except for a vague memory of her), learns about an ancient cult and finds himself embroiled in a conflict he'd had no idea about. This has quite a lot packed into it, fighting, swordplay, sex, affairs, intrigue, spies, religion, mystery and treason. There isn't any holding back here, from torture to a bisexual, murderous Pope.

Tom Riley portrays the brilliant yet tormented Da Vinci, right from the first episode Tom Riley IS Da Vinci and not once did I feel like this wasn't how the real Da Vinci was. The mystery of the Sons of Mithras is always there, always in the story somehow, but the great thing is that whilst being the main plot of the series, it isn't overpowering and there is so much going on and intertwined that there isn't any annoyance over the plot.

My favourite episode involves a fear of demonic possession and of course murder disguised as releasing the sisters from their possession. Because Da Vinci doesn't believe in demons it turns into a slight CSI episode as he tries to work out what is going on. I really enjoyed it as I enjoy seeing how different times would deal with trying to solve some crimes. The final episode has one heck of a cliffhanger and my husband and I were both disappointed when we realised that the 8th episode was the last episode, thank god season two is now on!

I really enjoyed this and can't wait to get stuck into season two.

This May, Ice Age Live! A Mammoth Show On Ice is coming to New Zealand for the first time.

From the creators of Cirque du Soleil, Ice Age Live! A Mammoth Show On Ice is hailed as one of the best family shows of this decade. Audiences will be treated to a spectacular ... more...