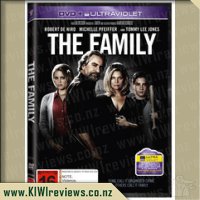 Disclosure StatementFULL DISCLOSURE: A number of units of this product have, at some time, been supplied to KIWIreviews by the company for the purposes of unbiased, independent reviews. No fee was accepted by KIWIreviews or the reviewers themselves - these are genuine, unpaid consumer reviews.
Available:
at leading retailers

In the dark action comedy The Family, a Mafia boss and his family are relocated to a sleepy town in France under the Witness Protection Program after snitching on the mob.

Chaos ensues as their former Mafia cronies try to track them down and scores are settled in the unlikeliest of settings.

This movie began with a very odd scene that still puzzles me as to why it started there - so to begin with this movie and I were off to a rocky start. It's very much a black comedy which is very offbeat, quirky and intriguing. It's cheerfully violent, but keeps you wondering and guessing where it is going and why it is still going...its an odd mix and I am struggling to define it in words. I think you need to see it to judge! I'm uncertain that the finished film was what the director wanted to it be...perhaps it looked better on paper!

There were moments in the film where my partner and I both looked at each other in bewilderment, and then just had to have a chuckle about the absurdity of the plot. The film is centred around a family who are hiding from the Mob, and are 'trying' to keep a low profile, but their inner beliefs and actions that come from these keep getting them semi caught out - as a viewer it is very amusing to watch the characters squirm as they try not to tell about their history to the neighbours, or the reaction of the way they are treated as Americans in France. Then a twist of fate lets the cat out of the bag. This twist was very clever and well thought through - I enjoyed it.

The children's characters are what surprised me the most, they look and act like pretty average teenagers then out of the blue there are hideous acts of violence. In my opinion it was very unnecessary for the film and took away from the main storyline which could have been developed better.

I love watching films and drama TV series and looking at the films from a critic's point of view, and also from the production side of things. I felt that the filming of this was very clunky and not at all very streamline, it looked like a budget film to be honest. The film contains some pretty fantastic names when it comes to Hollywood, but there were mistakes and editing issues that shouldn't have been there. I did look this up online and there was a lot mentioned on other site which confirmed my thoughts.

Overall, I would have hoped this was better than it was. For me, it was a little to absurd, a little too slow and unnecessarily violent. On the other hand as I mentioned, some bits are very clever and it has a kooky undercurrent to it. I think it's worth a watch on a rainy Saturday night!

Two seemingly dumb teens struggle to prepare a historical presentation with the help of a time machine.