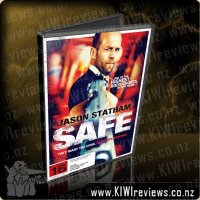 Statham plays Luke Wright, an ex-special forces operative who decides to save a young Chinese girl. The girl, Mei, is a mathematical genius who has memorised the combination to a safe that contains thirty million dollars. Once word gets out that Mei is the only person who knows the safe's combination, everyone in the criminal underworld - including mobsters, corrupt New York Cops and even Mei's own family - try to capture her. It's up to Luke, her only protector, to keep her alive and keep her safe.

We sat down to watch this the other night. Action films are not my first choice, but my husband loves a good action movie. He loves the thrill of watching car chases and hand-to-hand combat and the hero saving the day. So I humour him as much as possible and watch along. My criteria is that the gore factor be as minimal as possible. Otherwise I have "why?" invoked insomnia.

So we sat down to watch this film. The beginning of the film takes a little to get into. You are thrown into several different storylines, where the pace is fast. The switching between stories is so quick, you aren't always aware of the switch. You also have to watch the screen. This is not a film you can really multi-task during. Taking my eyes off the screen for 5 or so minutes meant I lost a lot of the dialogue. This is because it switches between English and Chinese. For whatever reason, watching enough of the scenes in Chinese I started to believe I knew Chinese (brain reading subtitles trick). So I turned away and when I came back to it, I realised I had no idea what just happened. I didn't make that mistake again.

Cinematically, this is a beautiful film. But then it also isn't. The film student in me had moments of euphoria watching some of the car chase scenes and fights. That's because they did clever little things I hadn't seen in a film before. It was kind of like watching the Matrix for the first time. The bullet time sequence was an Invention of film, which is now a Convention (something everyone does). I felt like I was watching new Inventions of film. But then other parts of the cinematography was so bland, with nothing particularly special about it. Similarly the gore level was all or nothing. I got 3/4 of the way through the film, feeling that the gore was a pretty good level for me. Then one scene suddenly shocked me so much I couldn't believe I was watching the same film.

The script was not particularly clever. In the beginning it feels like it's just going through the motions. Then the story comes into its own. Its a good movie, but it didn't blow my mind. As my husband said, it was not the best thing he had seen Jason Statham in but it was not the worst either. I guess you could say that Safe is "safe".

Everything seems to be changing for the better at Hotel TransylvaniaŌ” Dracula's rigid monster-only hotel policy has finally relaxed, opening up its doors to human guests. But behind closed coffins, Drac is worried that his adorable half-human, half-vampire grandson, Dennis, isn't showing signs of being a vampire. So while Mavis is busy visiting her human in-laws with Johnny Ō" and in for a major cultural shock of her own Ō" ... more...