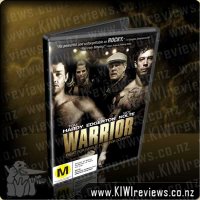 Haunted by a tragic past, Marine Tommy Conlon (Hardy) returns home for the first time in fourteen years to enlist the help of his father (Nick Nolte) to train for Sparta, the biggest winner-takes-all event in mixed martial arts history.

A former wrestling prodigy, Tommy blazes a path toward the championship while his brother, Brendan (Edgerton), an ex-fighter-turned teacher, returns to the ring in a desperate bid to save his family from financial ruin. But when Brendan's unlikely, underdog rise sets him on a collision course with the unstoppable Tommy, the two brothers must finally confront each other and the forces that pulled them apart, facing off in the most soaring, soul stirring, and unforgettable climax that must be seen to be believed.

A rousing ode to redemption, reconciliation and the power of the human spirit, Warrior is also a moving testament to the enduring bonds of family.

This was a movie I thought was going to be something more corn than grit and I was very glad to see how wrong I was. The story was compelling, uplifting, heartbreaking and devastating in rapid sequence.

The angst of a father's heart as he tries to change his ways, repent, and get peace in himself, while trying a futile effort to rekindle some love from his two estranged sons - one on whom he lavished his attention and will to win, while at the same time driving away with his overbearing, alcohol-fueled anger which he took out on his wife, until she and the star pupil son left to protect themselves. The other, overlooked and barely tolerated, until he too leaves to find his own place in the world inside any number of boxing rings, and from there his own family and life.

The pain in a son's soul as he tries to find a way to keep a promise to his brother-in-arms, who died on the battlefield leaving a wife and child at home in need of financial assistance. The pain in the other son's heart as he discovers he must go back to his old ways to save his family from losing all they have worked so hard to achieve - and in the process nearly losing it all anyway, because of a broken promise never to do just that.

Add into this the wonderfully typical "end of level Boss" to defeat, in this case a very substantial and as-yet undefeated Russian fighter making his debut fight on US soil amid a huge media fanfare. Mix in a few dark secrets coming to light, more than a few "How will he get through this" moments, a box and a half of quality, absorbent tissues, and you have a brilliant movie that might, just might, carry enough cross-gender appeal to make for a nice evening snuggled under a blanket on the couch with your significant other and a huge bowl of popcorn.

All in all, I was really glad I gave this a go. It probably won't be for everyone - nothing ever is these days - but this is pretty good. I was pleased to see Tom Hardy making star billing. I have heard a lot of good things about him recently and wanted to catch one of his flicks to see how he pans out. His rendition of the angry son was very convincing, if a little darker than I would have expected from the character.

Lovable little Dumbo's mother thinks he's the most perfect baby elephant ever, but the rest of the circus herd can't get over mocking his oversized ears. When Dumbo's mother is locked up for trying to defend her baby, the little elephant is left at the mercy of the mean elephants and the uncaring circus crew, who make him into a clown. It's up to tiny ringmaster pal Timothy Mouse, a pack of wise talking crows, and a ... more...