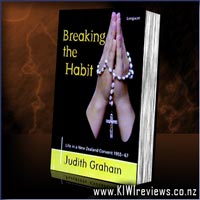 In 1955, at seventeen years of age, Judith Graham entered the Dominican Order and began her life as Sister Stephen. In this compassionate yet frank account she recalls her years as a Dominican nun during the repressive pre-Vatican II era.

The vows of a nun - those of poverty, chastity and obedience - encapsulated in the commitment of 'death to self', proved too much for Sister Stephen. Her battle for acceptance and spiritual fulfilment was stifled by the rules and regulations of the Church. Yet leaving the Order was even more difficult. After a twelve-year struggle she escaped from the convent 'feeling like a battered wife'.

Breaking the Habit, first published in 1992, is a warm, personal story of increasing doubt and subse- quent growth, and of freedom of spirit - 'a freedom I will never take for granted'. It also captures a way of life that no longer exists, and one woman's struggle to regain her sense of self.

Breaking the Habit is a gripping and compulsive read. I had some trouble putting the book down. I was totally engrossed within its pages.

Breaking the Habit tells the autobiographical story of Judith Graham who was a nun in the Dominican order during the mid 1950s until late 1960s. Her clear narrative bring home the stark reality of a life within a convent and the three clear and abiding rules of povety, chastity and obedience that governed her daily life.
Graham also tells of her own internal struggle with herself and her feelings of being trapped within this order and the words and comments passed by the other sisters that kept her imprisioned within the convent walls. Clearly narrated is the daily life and rituals.

The book finishes with Graham leaving the order and her return to civilian life outside the order, and finally into normal family life.

The book is an easy read, filled with light humour, refreshing honesty and stark realism of a life that no-one could ever comprehend; nor would anyone except the most devout ever wish to live. The tale contained therein will survive as a grim testament to those selfless people who do God's work. The true unpaid heroines in so many walks of life.

Thumbs up to Graham for bringing us this tale and giving us outsiders a brief glimpse into a world go by, a tale of life which few will ever get to tell, and a story of a quickly disappearing way of life.

THE PREDATOR IS NOW PREY - WILL HE SURVIVE?

Wade Hanna emerges childhood from the unlikely depths of a Louisiana swamp to a life of fast cars in the Big Easy.

His youth is fraught with unwelcome misfortune and unsuspected servitude as an undercover operative.

To find sanctuary he joins the Navy submarine service only to find another silent sanction in his path.