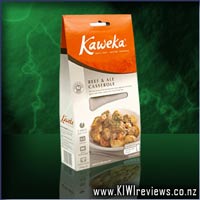 Our Beef & Ale Casserole is a traditional favourite containing tender, bite-size pieces of prime beef and choice vegetables, simmered in a smooth gravy with herbs & spices and micro-brewed ale.

Our recipe has strong European origins - for generations, both French and English cuisines have included traditional casserole dishes made with beer (carbonnades). We've added our own Kaweka flavours for your added enjoyment.

This is a rich and hearty casserole made with real beer. And not just any beer - we use Limburg (www.limburg.co.nz) - a quality micro-brewed beer from the Hawkes Bay. We think it gives this dish a subtle malty flavour which complements the beef beautifully. (Parents - relax! The alcohol content of the beer is 'cooked off', but the flavour of the ale remains so it's perfectly safe to serve to children.)

Like all Kaweka meals, our Beef & Ale Casserole contains no additives, preservatives, artificial colours or flavours. It's low in carbohydrates and we use only tender NZ beef. We do use wheat flour in the recipe so this meal is not gluten free.

I wasn't completely satisfied with the taste on this one, and it did seem a little bitter, but I also assumed this was due to the Ale content of the meal.

Still this was a very nice meal when mixed with some rice or a little pasta. It also wasn't too bad spread over a bed of potatoe wedges.

So not my most favourite of the Kaweka range but still an okay meal in my book.

Never have been a fan of beer in food... far better to put it in a vessel of some kind, and keep the alcohol content for better uses, that's my usual opinion. I think this has evolved over my years due to the bad reaction I once had to a dish that had red wine and port in it, which I don't fancy in the least.

However, braving a possible bad reaction, I tucked into this dish and was very pleasantly surprised at the rich flavour and texture. Serving it on a bed of wedges was a bit too dull for me, so I tried a bed of crispy Kumara Chips and that really set the flavour off nicely.

I was pleased at the quantity of meat chunks in this dish, and the sauce wasn't as thick as a stew, but was thicker than many other heat'n'eat meals I have encountered, but the taste of the ale was a little stronger than my tastebuds would have liked. Again, this is a personal preference... if you are someone who likes their beers strong, and can appreciate the taste in their food, you will probably enjoy this far more than I did.

Overall, though not my favourite of the range, this is certainly one I would be tempted to try again... but I would be experimenting on ways to tone down the beer taste to being a background to the herbs and meat flavours.

This was another contender for first place with me. I have always enjoyed casseroles, but never have I thought of serving it on a bed of wedges! Digging through the freezer revealed a lack of wedges, but did turn up a bag of frozen mini hash browns. These proved to be a winner as well, providing a portion of veges as well as a serving tool. The mini hb's made great scoops for the casserole and their spicy coating gave the dish a much needed flavour boost. I could see this being quite tasty over rice, mixed with cooked pasta spirals, or even good in mini pies, if you have a home pie maker. If you broke the meaty chunks down a bit, it could also do well in a toasted sandwich maker as well.

Rule 1...
I thoroughly enjoyed the Beef and ale casserole. I had already tasted two of the other Kaweka products so I was awaiting a taste sensation. I was not at all disappointed. The casserole had a superb texture - probably the first thing I noticed about it, it was literally melt-in-your mouth. Again like the Italian-style bolognaise and the Chilli con carne it was delightfully meaty. There was a definite taste of ale, but certainly not enough to overpower the meat and vegetables, and a nice balance of herbs and spices added to the fantastic flavour. The pieces of meat and vegetable were nice and chunky to, something I have always preferred in a casserole. After checking out the nutritional information, I found that it has a nice level of sodium rather than being too high. Quite high in protein which is good, a little higher in total fat than I would have liked with half of that being saturated, so maybe be careful if you have cholesterol issues.
I used the microwave for this flavour, and did find it slightly difficult to grasp the bag. Whilst I was aware it would be hot, perhaps a warning on the bag as well as in the instructions might be helpful.
The Beef and ale casserole was delicious, and would be a great idea for lunches or just to have in the cupboard for those nights you are in a hurry or just don't want to cook.

Rule 2... experimenting!
I didn't get to do much experimenting with this flavour, as I was in a hurry to go out (I guess something these were made for?). I also had neither the time nor the ingredients for the serving suggestion which was to serve either on mashed potato or a bed of wedges. Instead I quickly cooked some rice and served it over that. I have to say 'Kaweka Quality' is a phrase I am quickly getting used to - It was as fabulous over rice as I imagine it would have been over mashed spud or wedges.

The Beef and Ale casserole is my second taste of the Kaweka range.

After experimenting with the heating time with the Thai Chicken curry, I microwaved the casserole for two and a half minutes and it was perfect. The casserole smelt pretty good, and looked pretty good too - just like a home cooked casserole.

The taste of the casserole was slightly on the bitter side, presumably from the ale. This could be personal preference but I found the taste to be a little unpleasant. The vegetables and the meat were both very well cooked and plentiful. The meat was very good quality with no gristle or fat which is very impressive in a heat and eat product.

Personal choice for this product is 5/10, simply because I did not find the flavour was for me. But the quality of the product is excellent and I definitely give top marks for this.

I had seen the ads on the telly about these meals but had not really done much to source them out. I was curious to know how good a mass-produced, typically tasteless packet meal could be. I was very pleasantly surprised.

Due to my over eagerness to sample the food in front of me, the first 2 or 3 mouthfuls were considerably hotter than I had anticipated. After slowing my rate of caloric inhalation I was able to start recognizing the different flavours and savouring the tenderness of the lamb. I liked the sauce for the flavours it contained, but it seemed to outlast the meat.

As this meal had been prepared for me by someone else, I did not get a chance to find out how easy the pouch was to handle when hot. On closer inspection with my dinner companion we both realised that a slight increase in the width of the seal on one side of the pouch would lessen the likelihood of scalds from hot liquids and slippery fingers. The tear-off portion of the bag is easily removed.

Overall, this is a meal I intend to look for again as well as any others I can get my hands on.