The Smell of the Moon review 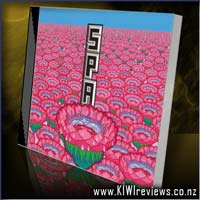 "When I go out tonight, I'm gonna get myself some drinks, I'm gonna listen to the Stones, get some rock and roll, forget about my conscience, I'm only twenty-three, you know I am-" (Spa - Neil of Diamonds)

When I got this cd I looked at the cover quite extensively. It couldn't be helped... it is very very pink. And dare I say it *ahem* somewhat symbolic in areas. Once I got over the pinkness and played the cd I was pleasantly surprised. The very first song, Neil of Diamonds was in fact one I had heard on the radio some time ago and had been trying to find since then. It's a reasonably 'pop-ish' song, as is most of the album (despite being listed as 'alternative rock'), but with good guitar riffs and drum beats. Easily one of my favourite songs recently.

Second most rocking song? Undoubtedly Yale with its strong guitar and drums. It has a really nice heavy beat.
Coincidentally Neil of Diamonds and Yale are the album's first two radio releases.

Another pop-rock style song is Nuns With Nasty Habits, although the vocals at some points have far too much effect on them and end up unpleasantly harsh sounding.

Beautiful Punk is slightly punk (as you might expect from the name) but still reasonably melodic.

Growing Up and Rollerskater Girl are probably the slowest songs on the album, and while Rollerskater Girl was a little bit 'Radiohead' singing combined with 'Beatles' music for me (not a great mix), Growing up was an unpolished gem of a song.

Sunshines is a nice feel-good ditty, a little bit 'Frenté' (for those of you who remember 'Accidentally Kelly Street').

Problems is probably one of my favourite songs off the album- it's quite quirky and takes a dig at how too much stuff equals too many problems. It has a really catchy beat, a nice harmonica solo, and funny lyrics to go with.

I fell in love with The Red Shoe Daisies. It is very whimsical lyrically speaking, but there is great guitar, reminiscent of good old 70s/80s band 'Dragon' at some points.

This album is great! I thoroughly enjoyed most of the songs- in fact I have been playing it on repeat constantly for the last couple of hours since I got it! Well worth the time and money for sure- Its NZ music month - make these guys top of your list and support NZ music!