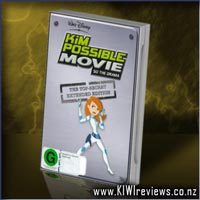 I have always been a fan of high-tech spy gadgets and the often amazing individuals who wield them... so it was with great pleasure I found myself getting drawn in by the little episodes that screen during afternoon kids shows.

Kim Possible is most assuredly the most fun version of the high-tech enabled spy... and the fact that she is a college-going teenager, who's allies include a super-cyber-savvy teen, and her best friend and resident klutz Ron Stoppable, make this show really entertaining, for me and my son too, and he's fussy!

It's nice to see a full movie made out of this show, even though it's only 65 minutes long it is still much more pleasing to see the story evolve in realistically complicated ways, rather than the overly predictable clips which have to cram the story down into 10 minutes or less. Much like the Jimmy Neutron movies, some of these 'little' cartoon shows do well when given the opportunity to branch out and entend the plots a little more.

Overall, for those who have kids who enjoy KP, and the adults who also enjoy them (-blush-), this is a great DVD to keep on the shelf for those rainy days. It's got enough action to keep the attention of the little ones, and it's good background 'noise' for those of us who prefer to have something on while we potter around doing other things. With none of the -ick- factor of some so-called kids shows, despite the high action content, this is certainly safe for any child of school-age or higher.