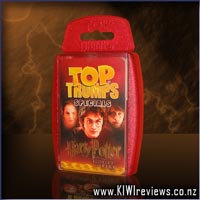 Disclosure StatementFULL DISCLOSURE: A number of units of this product have, at some time, been supplied to KIWIreviews by the company for the purposes of unbiased, independent reviews. No fee was accepted by KIWIreviews or the reviewers themselves - these are genuine, unpaid consumer reviews.
Available:
At Quality Stationary and Game outlets

The fourth film adaptation of the Harry Potter series is accompanied by the second Harry Potter Top Trumps pack - 'Harry Potter and the Goblet of Fire'. The film is packed with magic, spells and wizardry - and so are the Top Trumps! Harry and his pals (and enemies!) are rated on categories including 'Magic', 'Cunning', 'Courage', 'Wisdom' and 'Temper', and this pack can be played with Harry Potter and The Prisoner of Azkaban for an extra special Top Trumps Treat.

Two or more players can play. Players deal the cards amongst themselves and one player will read out a fact from their top card - the other players must openly compare the same fact. Whoever has the highest fact, wins the opponents cards. The winner will be the person who has all the cards at the end. Magic!!

I quite liked the movie and this just topped it off for me. For anyone who really enjoyed Harry's latest antics on the big screen, this would be a great game to bring home. With all the same rules as the rest of the decks this is really easy to play for even the kids. Nice and easy on the eyes, with stunning artwork and easy to read stats, this is a great game all round.

Many years ago, too many, I used to play a game called StockCars... the concept was almost identical and though it was a very popular game, like all things it faded away. So when I saw this game pop up in the local Whitcoulls store, and read the really simple rules, I was overjoyed to see that a childhood favourite had gained a new lease of life.

The pack has 30 cards, and covers all of the major characters that featured in the book & movie, including the dragon Harry faced in his first challenge, all the goodies... and all the baddies too... however, the most notable, by his absence, is ol' Lord V himself... this appears only as a SuperTrump card in the minipack given out in the current Whitcoulls promotion**... so if you don't have it yet, get down to your local store and make a qualifying purchase.

Really, the best thing I can say about this game is that it is amazingly simple to learn, and astoundingly fun to play, especially with younger kids... and for those who, like me, can't leave something untweaked, it can easily be converted into a number of party games. On it's first playing with a couple of mates, we 'adjusted' it into a unfortunately effective drinking game. -blush-

Overall, this has got to be considered a great winter time-passer, and for those magpies out there, yes, it's very collectable. When combined with the other Harry Potter deck you can either increase the number of players, or make a longer, more challenging game. If you can't seem to find it, check your local stationary retailer, or email KIWIreviews for details.

** PLEASE NOTE: This promotion is valid at the time of this review. Availability of the promotional pack is at the sole discretion of the Whitcoulls brand. KIWIreviews offers no guarantees, either explicit or implied. For the sake and duration of this promotion, please ignore the disclaimer on the barcoded card in any purchased packs, as it does not apply in this case.

I remember Top Trumps from my youth. Almost every week someone would come to school with yet another pack which we would eagerly devour, whatever the pack was; rating everything from helicopters to dinosaurs. Of course, a primary school is a hot-bed of one upmanship, and alas, I too, was no exception which is what made this game ideal for kids then as it will appeal to kids today. I loved the game as a seven year old, and now, nearly thirty years later (I sound so old!) I am fortunate to be able to re-aquaint myself with this wonderful game.

I have only recently seen the game in NZ, but on checking the Top Trump website, I see that the game was out of production for many years until someone (an old fan, no doubt)had the foresight to reintroduce a waiting world to the pleasures of Top Trumps.

The game itself is very simple to learn, making it an ideal parent-child game as well as a child's game to be played with their peers, and one which I have been playing with a keen daughter (who will add her review shortly).

The cards are bright and colourful, clearly laid out with all the relevent information. My daughter and I have had hours of fun with this game. So far, it has been played nightly - mainly as a way of my daughter trying (rather successfully, I might add) to delay her bedtime. The pack has made it to school twice, and survived the ordeal admirably and resulted in angry stares from the other parents whose child says 'but her dad got them for her'.

At under a tenner a pack, it is not going to break the bank of anyone. Few games cost less than $10, and few games will give the hours of fun that one can get from Top Trumps.

Yes, I have the Voldemort card too, which will not be leaving our collection. My daughter values him too much.

All that remains for me to say, is that Top Trumps is an excellent game and excellent value for money, and at a price children will not have to save for very long before adding another pack to their collection.

It's fun and some of it is spooky and I had a lot of fun playing with it.
The pictures are good photos and look like they are coming out.
My friends loved it and they laughed at Hagrid's girlfriend. They all want to buy a pack because they thought it was very cool.
My friends liked it because they could learn it easily and they know how to play it.

Dumbledore is my favourite.

I told my friends if they have some money to spend, then they should buy some Top Trumps.

Draft dice and use the tools-of-the-trade in Sagrada to carefully construct your stained glass window masterpiece.

In more detail, each player builds a stained glass window by building up a grid of dice on their player board. Each board has some restrictions on which color or shade (value) of die can be placed there. Dice of the same ... more...