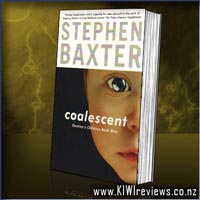 Disclosure StatementFULL DISCLOSURE: A number of units of this product have, at some time, been supplied to KIWIreviews by the company for the purposes of unbiased, independent reviews. No fee was accepted by KIWIreviews or the reviewers themselves - these are genuine, unpaid consumer reviews.
Available:
By order

The first in a new trilogy that will chart different evolutionary futures for mankind, Coalescent is the story of a divergent strain of humanity; a hive mind, that subsumes the individual.

It is a story that begins with a vivid depiction of the decline of the Roman Empire and which, down through the years, shows how one woman's determination to protect her daughter has such frightening consequences for mankind's future existence.

This is at once a stunning historical novel, a superb piece of ideas driven SF and the intensely felt story of one man's discovery of the dark secret at the heart of his family.

As the beginning of a trilogy,a book needs to really grab me, pre-emptive salvation for the rest of the story in books 2 & 3, really.

Thankfully, Stephen Baxter has already impressed me with many of his other titles, so I was kinda expecting a lot from this book.

I wasn't disappointed! Though the hops backwards and forwards in time can be a little disorienting in the early stages, I soon got used to flipping between two mental constructs, one based in the last stages of the mighty Roman empire, and one in modern day urban centres. The stories basically revolve around Regina, a Roman-era girl who had a poor-little-rich-girl start, then a major shock, and basically had to learn to fend for herself a few short years later, and George, a modern decendant of Regina's legacy.

Without giving away the whole plot, it is difficult to really give you my full feelings on this book, but I can tell you that though there is a long, rather drawn-out start... without all that lead-up, the whole point of the book wouldn't work. You need to know what happened to Regina to shape her into the person she became, the leader she was at the end instead of the spoilt brat she started out as, the founding force behind a miniature empire that lasted thousands of years... it's a bit like a rocket launch... slow to start, but unstoppable once it gets up to speed.

Now, in keeping with the time-jumping going on throughout most of the book, the end has a real twist, one I didn't see coming at all... I can only wonder how it will merge into Book 2, because it just seems to be bunching up for a huge leap into something new... which is a bit of a shame really, I found the historical perspective highly entertaining and informative. Though I wouldn't want to risk a History exam based on the information, it holds together well enough it reads in a very plausible way.

Overall, a stunning start to the series, and I am very much anticipating more of the same wonderful storytelling from Stephen Baxter. As an introduction to a stunning concept, this book stands out from the crowd. The concept is not only stunning, in that we overlook it examples of it every day, but that humanity might also become part of it is something that blew my mind... it strikes me as far from impossible to contemplate, especially with the way the world is heading. If you are a sci-fi buff and you haven't bought any of Baxter's works, you would be well advised to start with this one... it is a lot more 'accessible' to non-science types than many of his books.