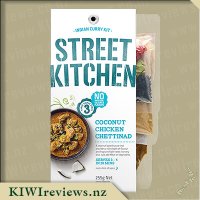 Disclosure StatementFULL DISCLOSURE: A number of units of this product have, at some time, been supplied to KIWIreviews by the company for the purposes of unbiased, independent reviews. No fee was accepted by KIWIreviews or the reviewers themselves - these are genuine, unpaid consumer reviews.
Available:
at local supermarkets nationwide

To South India the Chettiar merchants returned bringing assorted produce and fragrant spices from frequent trading with their Asian neighbours. Over generations Chettinad cuisine has developed into one of the most recognised cuisines of India.

Accordingly, it is said that you are truly blessed to dine with a Chettiar; whether it be on the street or in a home, as the esteemed guest you will be invited to sample a lavish feast of succulent dishes made with the finest blend of aromatic spices and piquant flavours.

Street Kitchen provides you with the special spice blends for the renowned Chicken Chettinad so you can create your own style of this simple yet delicate coconut-based curry. 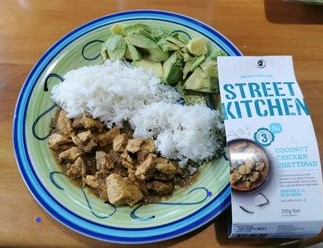 Chettinad was a curry variety that I was completely unfamiliar with, so I did not know what to expect. We had three hungry boys to feed so decided, since this was meant to have just a hint of spice, that we would try it on them. The instructions suggested that we could add coconut milk to taste before serving. We did not have any in the house but we had a can of coconut cream so we made sure that we had some on the table in case it was needed.

When we first opened the packet, the aroma hinted that the contents might be spicier than expected, and I was concerned that the younger boys might find it too hot for their liking. However, the taste did not bear out that first impression, so all was well. We had chopped up a large avocado to serve as a side as this is something that all kids enjoy; besides, it goes well with almost all curries.

With five of us needing to be fed, I thought we might not have enough, but there was plenty to go round and we even had some leftovers. My partner and Mr 17 both said it was unmistakably Indian when they took the lid off the pot and sniffed it during the cooking process. However, when they gave it the taste test, they both said they could not taste any coconut at all. That was rectified once we stirred in some of the coconut cream. This really brought out the flavour, transforming the dish completely and making it much more interesting. Rather than having it on the packet as a recommendation, I think it should be listed as one of the required ingredients to add. It certainly worked for us.

The younger boys both enjoyed it, much to my relief since kids can often be fussy when presented with new foods. I was a bit taken aback when one of them said it would be nice in a pie with a crust on top, but then again, why not? It would be an easy pie filling to prepare although the liquid might need to be thickened first.

My partner thought this curry would be incredible with prawns or even shrimps instead of chicken. Once I thought about it, I agreed - seafood would certainly soak up the flavours. When I looked at the packaging again, I saw that seafood was actually suggested as an alternative to chicken. I had somehow missed that piece of information because I was too busy concentrating on the default preparation instructions. A good thing it was not a vital part of the process! Next time I will make sure I read all the instructions before starting.

Smoky and creamy with good heat, this luscious sauce has a depth of flavour which lifts and adds excitement to your plate. It's not overly smoked or heavy so is great with a wide range of foods.
•  Spice Rating: Medium-Hot
•  NOTE: Refrigerate After Opening
•  Gluten Free