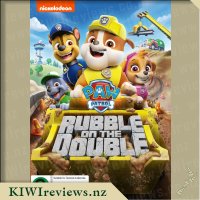 Disclosure StatementFULL DISCLOSURE: A number of units of this product have, at some time, been supplied to KIWIreviews by the company for the purposes of unbiased, independent reviews. No fee was accepted by KIWIreviews or the reviewers themselves - these are genuine, unpaid consumer reviews.
Available:
October 2020

Get ready to raise the woof with Rubble and the rest of the PAW patrol in these eight construction missions! Whether they are saving animals, superheroes, or even a rock-and-roll show, the pups can always build a plan to save the day.

Join Ryder and his canine friends - Skye, Marshall, Rocky, Chase, Zuma, and Rubble - as they use their many talents to protect the seaside town of Adventure Bay.

Paw Patrol is on a roll! Can you dig it?

There is nothing better than reviewing a movie aimed at pre-schoolers in the company of a group of children who are just the right age. I had six children to watch and evaluate it with me, and we had great fun laughing at the weird and wonderful situations. The youngest was two and the oldest ten, so there was a good range of reactions with everyone keen to be heard (usually all at once). Even Mr Ten, who had assured me he was really too mature to sit down with the younger ones, was captivated most of the time.

The DVD is divided into eight short episodes, each just the right length for the two youngest children. There was no chance of their getting bored as they were able to stand up and stretch after each story. Mr Two and Miss Three loved the graphics, and because the pups all had a unique main colour, it was easy to tell them apart. The older children liked the way that each pup had a catchphrase, and it was not long before they were chanting along with them. Mr Ten found this a bit annoying, but he was in the minority.

Each of the stories has a learning component aimed at young viewers. Two episodes underline the dangers of venturing into a space that might have hidden hazards - like a cave or a snowdrift. Another teaches children about the way beavers build their dams; yet another retells the tale of the three little pigs (with variations). Mr Two and Miss Three followed their exploits with glee, not in the slightest fazed by the thought of a group of talking dogs with special powers. The twins, who are five now, were still young enough to enjoy the puns and to cheer when things worked out (which of course they always did). Miss Eight tried to be staunch and say that the stories were a bit too young for her, but it did not work - she was enjoying it just as much as the little ones! It helped that none of the children was familiar with the series so they were approaching it all from a fresh point of view.

The first of the featured eight stories begins with the occasion when Rubble (the builder) joins the team, and the remaining seven episodes feature him taking a prominent role in a rescue. The dogs all work as a team with their human friend Ryder. As they all have a particular strength, Ryder assigns a combination of first responders to deal with requests for help according to the situation. Each pup has a set of tools to help with his (or her) job, and they even have colour coded vehicles designed for their rescue missions.

Although Rubble is in theory the hero of the episodes on this DVD, the most popular character by far for the young audience was the goofy Marshall, the fire fighter. Always last, always hamming it up, but with a heart of gold. It is appropriate that Marshall is a Dalmatian because this breed is often used in fire stations as working dogs or just as companions. They are sometimes hearing impaired so they do not normally get spooked when they hear the sirens and other engine noises. They are also good at rat control, and in the old days they would bark when they approached a fire so that anyone in danger would be alerted. "Pups Find A Genie" shows Marshall in one of his funnier moments in the Paw Patrol team. He loses control of the water cannon and soaks the interior of the elevator, but instead of getting upset, he boasts about how beautifully clean the area now is! And then, in "Pups Save A Cow", he saves the day by using his fireman's ladder to reach the truck. Without him it would all end in disaster; this time, he is the hero of the moment.

The children would love to explore some more in this series now that they have been introduced to the pups. As an adult, I found the repeated catch phrases and theme tune a bit annoying, but then I am not a pre-schooler. For that age group, it would be hard to beat.

Most years, there are confirmed Artists coming from all over ... more...