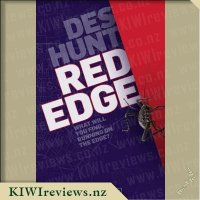 Twelve-year-old Cassi Whelan and her dad have just moved into a repaired house on the edge of Christchurch's Red Zone. Although Cassi was only four when earthquakes decimated Christchurch, her memories still haunt her. An obsessive runner, she finds the wide-open spaces of the cleared Red Zone suit her perfectly.

However, she becomes suspicious about strange comings and goings at the broken-down house next door. A chance meeting with Quinn, a boy who lives on the other side of the house, leads to their setting up a surveillance system to investigate what is going on.

Can Cassi and Quinn solve the red edge mystery?

Des Hunt's book "Red Edge" is relatable for many different reasons. The novel has a good pace, and at no point do you find yourself bored. Readers are left wanting to find out more as the story unravels. At the core of it, the novel is a crime story centred around the Red Zone, Christchurch, New Zealand a few years after the major 2010 earthquakes. It builds around the themes of friendship, family struggles, and dealing with emotional pain.

The characters are faced with everyday life challenges of a preteen, alongside the bigger picture stuff of dealing with the aftermath of a life-changing event. The children are relatable with dysfunctional families and the situations that arise. More than this, the feelings Cassi has years after the earthquakes will resonate with many Kiwi kids. Having a female main character is lovely as I so often find novels for children of this age with male leaders. Cassi struggles with possible anorexia, whilst her male friend Quinn struggles with being overweight. He is bullied online and now struggles with making connections with others. As a school teacher, this are issues I see students faced with everyday. So I love that Hunt has used relatable characters to connect with his audience.

This novel would make a great class read for a variety of students, ideally for Years 5-8 I feel. As a year 5/6 teacher, my students could connect with the characters and enjoy the investigative storyline. For older children, students could delve deeper in the root of the characters pain and the situations which have arose because of this. "Red Edge" is an enjoyable book and one I would recommend.

My friend's grand-daughter, Miss 15 (well, nearly 16 now!), reviewed one of Des Hunt's books with me over a year ago and asked at the time if she could help me again if I ever got another of his works to review. So, even though the book is aimed at a slightly younger age group, I felt she would enjoy it nonetheless. I read the book myself first, then passed it on to her for comment. Because it is set in Christchurch and Kaikoura, both of which are totally familiar places to her since she has lived there and still visits family regularly in nearby Ashburton, the appeal would be all the greater.

My own reaction to the book was what I had expected. I enjoy Hunt's style; the prose flows smoothly, with nice little "mini cliff-hangers" every so often which of course just make me want to keep on reading, I also appreciate that I can relate to the characters and the storyline even though the main protagonists are children; they are described vividly, warts and all, and display a range of character traits which make them all the more believable. Social themes, as in other Hunt novels, are presented honestly: one of the main characters (Cassi) is borderline anorexic; another (Quinn) is overweight and has been the target of bullies because of this; a third (Harmony) is living with an invalid mother, and is defensive to the point of being antisocial. Part of the story deals with each of these children's journeys as they learn to deal with and work towards overcoming their issues.

And then, of course, there is the wider narrative which is essentially a good detective yarn. Woven into this are the wider issues of conservation, animal welfare, fraud, and comradeship - all set against a background of post-quake Christchurch and Kaikoura. The mental anguish caused by the earthquakes is a contributing factor to the children's lives. They have been uprooted, rehoused, and traumatised. In the process they have lost beloved pets, and parents have gone their separate ways. Learning to adjust has been a long process, taking years of recovery to gain the strength necessary for a new start.

Miss 15 and I had a long talk once she too had finished reading the book. She was pleased that the main character was a girl - in the other Des Hunt book she reviewed, the protagonists were two boys. Although this is a minor point, she felt she could relate to Cassi as she too likes going on long runs. However, she also has a healthy appetite, and was quick to assure me that her mother makes wonderful bacon and egg pies! She is a supporter of animal rights, and is particularly interested in small animals and insects, so was fascinated by the descriptions of the weta. Next time she goes to Kaikoura, she is hoping to track some down.

She liked the way the children worked with the adults rather than on their own. At her age, she is ready to accept that sometimes it is necessary to compromise and ask for help from the older generation. Younger children can be too independent sometimes, but there was a healthy relationship in this story between the kids' independence and the grown-ups' willingness to support them from the sidelines rather than taking over. As Miss 15 said, it is all a matter of trust and knowing when to allow the kids to take a few calculated risks. Reading this book has made her all the more convinced that families should not wrap their children in cotton wool!

One reservation we had was the way the school principal was portrayed as being only too ready to believe the worst of Cassi when she was accused of arson and theft. She was willing to judge Cassi guilty of both crimes on the word of other people - but with no other proof. I have not had the experience of a principal making a unilateral decision on a student's guilt, and neither has Miss 15 (or at least, not in the three schools she has attended). There again, this may have been deliberate: perhaps this principal was intentionally depicted as being especially gullible and therefore willing to accept unsubstantiated allegations.

Miss 15, like me, thought the pace of the book was great. It did not lose momentum at all; both of us finished it in record time because we wanted to find out what would happen next. I am going to ask Mr Ten to read it as well; I am sure he will be equally positive because he likes a good adventure yarn. Despite Miss 15's comment about having a female protagonist AND a female villain, I don't think it really matters - the story would have been just as good with males in both roles. I will be interested to see what he thinks!

Get the essential facts - fast! With jaw-dropping artwork for maximum impact, Navigators takes you on a thrilling adventure through the latest, the strangest, the most incredible information.

The ultimate guide to the medieval world - knights, battles, tournaments and awe-inspiring castles.

Charge into battle at Poitiers, and dodge steel swords and flying arrows as the Crusaders clash with fearsome Saracen ... more...