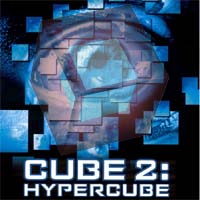 Continuing in the tradition of the original "Cube," which was based in a three-dimensional universe: Eight complete strangers find themselves trapped in a four-dimensional universe. They must fight for their lives and for their freedom as they travel from level to level. But this is no ordinary universe. The laws of physics do not apply here. ‘Up is down,’ ‘left is right,’ and ‘in is out’ as each level of the Hypercube becomes increasingly more complicated and intense. Only one can survive the Hypercube.

Having seen the first Cube movie and managing to buy both the first and second on DVD, this was a must watch for our next movie night with my mum.

Going by the same premise of the first movie, a group of strangers end up in the cube, and as they figure out, they are all there for a reason. They move from room to room trying to work out a way to escape, and this time the traps are different as well as the gravity. For example, you could exit one room by going through the left side and suddenly you are coming up through the floor in the next room. This movie deals with time and space more than nasty traps leaving for some wacky moments.

I liked this one more than the second as it deals more with alternate timelines, messing with gravity and so on. Don't get me wrong, there are still a couple of nasty deaths, someone being accelerated to death isn't the most pleasant thing to see even a moment of, but it isn't gory and is a nice change from horror movies today. The acting doesn't stand out and I don't think I've seen any of the actors in anything else, the plot of the movie stands out more than anything else.

If you liked Cube then you should enjoy Cube2.

This movie is FREAKY! If you liked the shock and gore of "Cube" then you will find this a tasty treat indeed. If however you DIDN'T like the first movie, why are you reading this?

The basics of n-dimensional geometry: 0 dimensions, theortically possibly, but no way to rationalise it. We have a single pinpoint in spacetime, with no height, length, depth, nothing. On a piece of paper, draw a single tiny dot.
Now we add another, giving 1 dimension. You can label that height, width, depth, whatever... but for this, we'll say width. So from that dot you drew, draw a flat horizontal line about 5cm wide.
Now we add a second dimension, height. Take that line and extend it upwards and across into a square. You could consider a square piece of paper a good analog for this.
Now we add a third dimension. Now we are in more comfortable territory. Now we take that square and extent it out of the page, into a cube. All with me so far? Good.

Now things get really bendy. We now add a fourth physical dimension (yes, time is currently the fourth dimension we interact with, but for this we have to ignore that) and we get a hypercube. This is a theoretical construct only, so far. But what if...

...it could be built or created.
...it was created by a genius who thrilled at such feats of brilliance.
...it was taken over and abused by some nut-cases at a military think-tank.
...you were stuck inside it, and woke up to find your worst nightmares weren't in your head.

Multiple Realities interact in a hypercube. Multiple version of everything in a hypercube can occupy near-space to each other. So once you are in a hypercube, or any other n-dimensional construct, you are inside it an infintie number of times, in an infinite number of locations, all at the same relative time. You CAN have your cake and eat it too, but doing so will create a causal split, creating two of you, one who has the cake, and one who ate it. Sounds fairly logical... and it is. IF you can wrap your neurons around the concept in the first place.

I would almost be willing to hire this one again, but more than likely I will just buy the DVD and put it beside the first movie on the shelf, to be watched when I am in the mood to twist my brain out of shape for a while. (Which happens more than you might guess, actually. I enjoy these sorts of theoretical twisters).

As for attention span, I was hooked when the physics started to emerge, and it was fun watching how a very talented director managed to bring across the concept in a manner that could be understood by as wide a variety of viewers as possible. It was a technical masterpiece, which impressed me mightily.

IF you are able to believe that it could be built one day, the sadistic uses to which it is put by the military research facility are VERY believable. All too damn believable really, we are a totally perverted species.

The special effects were indeed the highlight, especially the final scene. a morphing hypercube is a sight to behold. Loved it.

Overall, I was really quite impressed, and would have loved to have seen this on the big screen after a few B&C's, to take the edge off.

In a final confrontation that will determine the ... more...