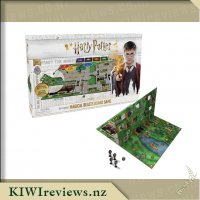 Magical beasts have broken loose at Hogwarts That means you and up to three friends need to save everyone by recapturing these fantastic creatures run amok. In this action-packed game, you play as Harry Potter, Ron Weasley, Hermione Granger, or Ginny Weasley. Collect clues to track down creatures both inside and outside Hogwarts! Watch out though, moving from Hogwarts to the grounds nearby can be treacherous and cost you clues and precious time. The dynamic swinging game board adds excitement that leads to hours of fun. Lumos!

Play as your favourite Harry Potter character.
Unique swinging game board allows play inside and outside of Hogwarts.
Explore the interior of Hogwarts and the surrounding grounds
Try to collect elements to capture the beasts.
Be the first to collect all the clues
Figure out which magical beast you have captured!
Suitable for ages 8 & up

I've been a fan of Harry Potter since the books first came out, followed by the films and everything else that has come from the very successful franchise. I saw this game and it grabbed my interest, but I wasn't in a rush to buy it as there are very few items that I have to have and this wasn't one of them, however it came up on special a few months later and I grabbed the family a copy. The game play itself is very simple, you need to collect one card, in each category, for one of the half a dozen or so creatures, gain all four and you win. Roll the dice, move your counter, if you pass over the right square you gain the corresponding card. It is possible to get more than one card in a turn, so plan your move carefully.

What adds to this game, is the board has a moving section, so roll a 'P' or land on a 'P' square and the board changes. This can get rather annoying at times, as two of the cards can only be collected 'outside' and two can only be collected on the 'inside' and if you and another player are at odds, it can end in a lot of board flipping and a whole lot of getting no where fast. There is also the opportunity to steal cards from other players, and since you can select any card, it doesn't have to be the top card, there is no way to keep your cards safe. In the end, this is a fun enough game to while away some time, don't expect to have hours of fun as it is very repetitive but it's an easy enough game for the kids to learn and enjoy.

ATMOSFEAR - a fast and frightening new DVD board game

The Gatekeeper has returned! Introducing a new, spine-thrilling DVD board game combining technology and interactivity - the ultimate in home entertainment.

You will remember Atmosfear from the 90's - it was called Nightmare back then and was one of the ... more...