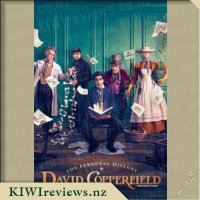 Disclosure StatementFULL DISCLOSURE: A number of units of this product have, at some time, been supplied to KIWIreviews by the company for the purposes of unbiased, independent reviews. No fee was accepted by KIWIreviews or the reviewers themselves - these are genuine, unpaid consumer reviews.
Available:
in cinemas 25 March 2020

The life of David Copperfield from childhood to maturity, with his own adventures and the web of friends and enemies he meets along his way. The film is near enough episodic in nature for the first act; each age period coming with its own location, characters, and subplot. It isn't until the second act when things start to settle down and become more serialised allowing the previous subplots to intertwine into a larger collective storyline. With a curious mix of narrative styles, the film begins with David Copperfield narrating his autobiography in a theatrical setting, before an audience, to which the viewers are set up with visual flashbacks allowing Copperfield to be present as an observer himself from time to time. This allows for creativity and flexibility in how things are put forward; such as narrating one's own birth or exaggerating scene transitions with visual metaphors.

"David Copperfield" features an abundance of acting talent, with the likes of Dev Patel, Hugh Laurie, Tilda Swinton, Benedict Wong, Peter Capaldi, and Gwendoline Christie filling out the ranks. Dev Patel has been proving his worth in Hollywood films, from "Slumdog Millionaire" and "Lion", to "Hotel Mumbai", his facial hair provides him with the ability to look like a variety of visually distinct characters (alongside his acting talent). In this case, he is clean-shaven, and he looks so different from his role in "Hotel Mumbai", that I have found myself rechecking the cast list to make sure that it is, in fact, the same person.

With a comedic quality to the story, our supporting characters are all quirky in one way or another, largely summed up with a single defining trait. This provides a consistent source of humour, and while the impact is reduced by its predictable nature, there are enough characters to provide a variety and prevent too much in the way of repetition. Hugh Laurie is potentially the most enjoyable support character; extremely eccentric compared to the others, yet still a more restrained performance compared to his early Blackadder days.

"David Copperfield" relies heavily on its use of comedy, as the story does take a few dark turns from time to time, but the mood is always that of levity. The story in itself is, oddly, lacking in content. It as if the first 100 minutes of this 119-minute film is spent setting up the backstory for a quickly resolved climax. A common issue with the film (which is highlighted by its reliance on comedy) is that it skips over the emotionally poignant moments of the film, constantly moving on towards the next plot point, reducing the impact of the darker moments and preventing the audience from being able to properly empathise with any of the characters.

From a visual perspective, there is a very clean and modern vibe to this period piece. When even the homeless characters are dressed in loud, colourful suits, one questions the world that they are observing; when the fictional aspect is brought to the forefront. The cinematography is well-executed, using lower angles to give the perspective of David Copperfield at younger, shorter ages.

Overall, "The Personal History of David Copperfield" is charming and pleasant. Dev Patel manages to portray a likeable enough character to maintain audience interest despite very little of consequence going on in the story. The comedic elements are predictable but still executed in a manner that has a surprisingly high success rate. It is the bubbly, effervescent vibe of the film that makes it work so well, but at the end of the day, "The Personal History of David Copperfield" is enjoyable but not memorable.