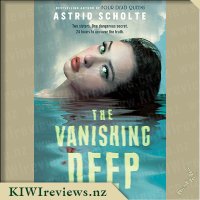 Seventeen-year-old Tempest was born into a world of water. The most skilled diver on the Equinox Reef, she searches drowned cities with her older sister Elysea, seeking out old world treasures to trade for Notes. After Elysea mysteriously drowns, Tempest scavenges the ruins alone, driven to collect enough Notes to buy her sister's life for 24 hours, and to finally learn the secret she had kept until her last breath.

However, once revived, Elysea convinces Tempest to break her out of the Palindromena research facility and they embark on a dangerous journey to discover the truth about their parents' death. But they're pursued by two Palindromena employees desperate to find them before Elysea's time is up, and to prevent them from uncovering the secrets behind the revival process and the true cost of restored lives.

Dead or living, everyone must pay the price.

The world was dying and becoming overpopulated, in a desperate bid to open up more land the leaders tried to melt a piece of land, instead they ended up wiping out billions of lives and flooding the world. In this post apocalyptic world, people are just trying to survive, divers finding remnants of the lost world to sell, trying not to cause their current homes to sink into the ocean and in the center of this small part of the world is Palindromena, where the dead can be brought to life for 24hrs, at a high price, of course. When I first read the concept for this book, the film Waterworld popped into my head but this is so much better. This book flips between Tempest, who just wants answers and Lor, who takes the place of his friend for one day and it changes his life forever.

The author does a good job of world building, showing what kind of life Tempest and Lor both live and also what kind of standing Palindromena has to everyone. There's plenty of excitment to be had as Tempest breaks her 'brought back to life' sister out and then go on the run from Lor who's life depends on returning Elysea before the 24hrs is up. Throw in some mystery as well as the sisters try to work out why and if their parents died. Giving the 24hr time limit on revival means that once Elysea is revived, the book sets out at a really good pace, there is no time to rest at all as they race against the clock.

Because the story centers on Tempest and her small area, there isn't much world building beyond her home done but that suits the book well, a map would have been nice, though, just to get a little more of an idea on placement. The ending felt a bit rushed, the author brings back a baddie and for a moment you think the book is going to go one way but then it doesn't (which did feel a little out of character but it didn't ruin things). I did like that one character isn't interested in love at all (nice to see in a book) and whilst there is a little romance it just slips in there, doesn't feel forced and is sweet enough to leave you wishing for just a little bit more.

Dinner ended up being two hours late so that I could finish this book (when motherhood didn't command my attention), a great mix of adventure, sci-fi and mystery.

She is the most powerful Witch ever known, centuries of hope and dreams made of flesh at last...