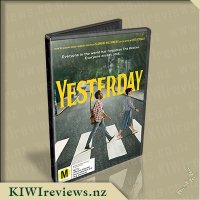 Yesterday everyone knew the Beatles. Today, only Jack remembers their songs. He's about to become a very big deal.

A songwriter wakes up one day to realize that he's the only person in the world to remember The Beatles. Using this knowledge, he sets a plan to become a major star.

The Beatles are synonymous with producing some of the most beautiful songs ever written. I don't think there can be anyone who can fail to be captivated by them. Having lived in Liverpool myself for a number of years, my love and appreciation of their music grew. But just imagine waking up after an accident, and being the only person in the world who remembers their songs. This is the premise which the movie is based on, and an interesting and comical chain of events is set off to change Jack's life forever.

For me, the movie pace is just perfect. The story flows well (as with all classic Richard Curtis pieces of work) and strikes just the right balance between being fantasy, but also believable. As ever with Danny Boyle, the direction is top notch. There are a couple of signature Danny Boyle shots in there too which I really loved.

Casting Himesh Patel in the lead role was an inspired choice. His performance as Jack, a struggling musician and boy next door, is wonderfully understated and perfectly charismatic. You are drawn to him through the whole story, and never once stop believing in him. A huge weight of expectation was placed on him performing so many of The Beatles' songs, but he never disappoints. The performances are uniquely his, all the while respecting the original music. His voice is perfectly placed to highlight and bring a new audience to these amazing songs. Opposite him, Lily James plays the utterly charming Ellie. Her performance is honest and endearing, and sits perfectly in the lead female role of this film. The other casting choices in the film also perfectly compliment the two lead actors, making the film work in harmony- a feature so often found in the work of Richard Curtis. The only slightly questionable casting choice for me was Ed Sheeran. Don't get me wrong, as a singer Ed has to be my favourite of all artists, but as an actor, I'm not sure his performance would quite be described as 'classic'.

The film runs for 116 minutes, a perfect time for watching he story play out, but also not over complicating things. A great selection of extras including insightful director and producer commentary as well as an alternative ending just add to the value that this DVD provides in addition to the movie itself.

The Beatles have been brought to the fore for a new generation, and this movie has it all. A great cast, amazing music, fantastic writing and a touch of Danny Boyle magic all add up to a truly magical piece of work. If you love The Beatles, love music, or even just love a good love story, this movie will not disappoint.