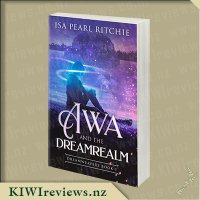 Disclosure StatementFULL DISCLOSURE: A number of units of this product have, at some time, been supplied to KIWIreviews by the company for the purposes of unbiased, independent reviews. No fee was accepted by KIWIreviews or the reviewers themselves - these are genuine, unpaid consumer reviews.
Available:
Nov 2019

At first the Dreamrealm is a glorious escape from Awa's daily struggles but something is not right... Soon Awa discovers she has a bigger quest, and everything she cares about is at stake. Will she be brave enough to face her fears and save her friends?

I have been reading more books by New Zealand authors in recent years, so when I saw this arrive at work, it piqued my interest, getting a chance to review this was one I happily took. The concept of delving into your dreams and affecting them isn't new but I looked forward to seeing where the author would take us. One thing I appreciated was that it actually takes place in New Zealand, naming Wellington (I've read so many NZ books that don't name a place, so could be anywhere). Our main character is also biracial, which brings up the topic of racism (which is dealt with well and feels authentic, a good topic for kids to understand).

This book took me quite a while to get into, in fact, it took me two thirds of the book to feel really interested in what was going to happen to Awa and the dreamworld she had entered. There were a couple of moments which felt out of character for this very anxious young girl, and whilst I understand that this is a small publication, there were still a couple of spelling/grammar mistakes that slipped through the cracks, enough for me to notice. Awa feels like a real person, she has anxiety and the way that that is dealt with and described feels authentic to me, from what I have heard from others and my own experiences.

The world described in the dreamworld feels small and enclosed but there were a couple of areas that were well described and brought wonderful images to my mind (there is a lake with a giant turtle, and a clearing with a giant tree). There is a little creature that tries to help Awa along her journey, for much of the book she is very cryptic and confusing. The fact that I found her very confusing at moments almost put me off the book but she does seem to improve, that or I got used to her in the end and gave up trying to understand everything she had to say. There is the usual 'oh no, we're in danger' moments at the end of the book, this I enjoyed but it was over too quickly.

This book was a bit of hit and miss for me, there were aspects that I enjoyed but I am not too sure yet if I will read book number 2 when it hits the shelves next year.

Before I started reading Awa, I stopped to check out the map at the start of the book. Intended or not, it bears a strong resemblance to a cross-section of a human brain which immediately started me wondering about the many ways we make sense of the world around us. Without imagination, there would be no scientists or artists, no hypotheses or experiments; the world would be dull indeed! But it is also true that these imaginings often lead to real outcomes, yesterday's mythology becoming today's fact. Only then did I start reading...

The novel consists of two intertwined narratives. One is the mundane; the account of a young woman who is dealing with her parents' breakup and adjusting to the new school she must attend. It is always traumatic for a teenager to be thrust into a new environment where the pecking order is pre-established and prejudice is rife. Anyone who is different for whatever reason can be the target of bullies and haters; the struggle to assert oneself and not become overwhelmed is so very real. Awa is already anxious; she does not need the extra challenge of a toxic environment. The relief when she finds two new friends is something every reader can relate to. There is strength in fellowship among peers.

The other narrative is that of the supernatural - the parallel world which is spawned by Awa's dreams and extends her in ways she could never have imagined. There are echoes here of other stories; New Zealand authors Gaelyn Gordon and Margaret Mahy both included similar themes in their young adult novels, and these in turn were inspired by authors like JRR Tolkien and Lewis Carroll. Awa's journey from sleep to "lucid dream" is almost plausible; since the story uses first-person narration throughout, each step is documented and evaluated by Awa as she experiences it. The reader shares her wonder and her puzzlement as she encounters each new situation and learns - often the hard way! - how to deal with it.

One of the drawbacks of a story which is written in the first person is that it does not offer the reader access to the thoughts of the other characters. Veila, her "guide" in the Dreamrealm, never materialises to the point of being fleshed out. She is ephemeral, transparent, lacking in substance when Awa needs her most. Part of Awa's frustration at not being able to get straightforward answers is due to Veila's reticence. I wondered at the author's choice of name for her given that she does appear at times to be "veiled" from Awa's presence. In the same way, her new friends Ella and Evan are never provided with a backstory. I was intrigued by them and would like to have known more! Finally, Felicity who plays a big part in Awa's new life but is never unpacked as a character. I was fascinated by her! What made her the way she is? Does she have a tragic background which has caused her flaws? Or is she simply the mundane manifestation of the Dreamrealm's Judgement?

I appreciated the way the story moves from one world to the other; at times the worlds overlap and elements of one appear in the other. The occasional comments by Awa when she is interacting with The Politician and Judgement made me smile - they are almost direct quotes from real-world political figures, and set the story firmly in the context of contemporary power struggles! Phrases such as "supernatural powers... the best powers..." and "I know all about those... great technology" could have been taken straight from current news reports. I also like the way that many of the "fragments" in the Dreamrealm are caricatures that embody specific negative aspects of human behaviour such as hoarding, narcissism, jealousy and anger. As in the pantomime tradition, these caricatures cannot be modified; there is no development, no possibility of change.

Having read the book once myself, I asked our eight-year-old to check it out, but she found the text just a little too challenging and gave up after the third page. Maybe in a year or so she will be ready for it. Her twelve-year-old cousin, on the other hand, finished it over two evenings and gave it an enthusiastic thumbs-up. She found she was completely engaged, and is looking forward to the sequel when it arrives. Having run her own gamut of schoolyard bullies - and learned to deal with them - she was sympathetic from the start. And coming from a multiracial background myself, I found my own reaction from an adult perspective was one of anger but also regret that racist attitudes are still around. I like the way that this book tackles these issues and makes them accessible to young readers, some of whom will hopefully get the message.