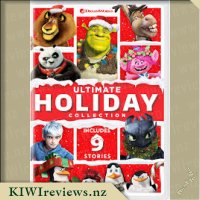 'Tis the season to bring the family together with the DreamWorks Ultimate Holiday Collection! Get into the holiday spirit with Shrek, Po, Hiccup, Toothless, Poppy and many more as they celebrate the most wonderful time of the year. Featuring 9 festive stories with your favorite characters, this collection is perfect for everyone looking to add a little magic to their holidays.

Do your kids like Shrek, Madagascar, How to Train Your Dragon, Trolls, Kung Fu Panda, Home and Rise of the Guardians? If so, this could be the perfect little DVD to grab.

First up is The Trolls which sets you off on a musical ride with The Trolls Holiday. In this half hour show, Poppy is desperate to provide a holiday to her friends in Bergen Town, who no longer have any holidays now that they no longer eat trolls. The classic hit 'Love Train' is used during a bus ride, the ride which made me think of Hitchhikers Guide to the Galaxy and Willie Wonka, as well as briefly showing the kids the original troll toys that we had when I was young. The original cast reprise their role and provide a fun little clip that aims to remind kids that friendship is more important than glitter, decorations or gifts. I'm a musical gal so I enjoyed this the most.

Shrek the halls - Christmas for the Village Idiot sums up Shreks reaction to discovering on Christmas Eve, that Fiona would love to celebrate the holiday, having ignored it for the year. Things move along nicely but then of course Donkey tries to bring everyone in and it messes up how things have been going. I found this one rather annoying for part of it, as it seems like they amped Donkey up by 100, I wanted him to shut up as much as Shrek did. I get what they're aiming for the kids to take away from this, but I think the Shrek franchise could have done without this addition. It was then followed up byDonkeys Holiday, I could have done with a different short between them given how irritated I already was with Donkey. This holiday short takes some well known Christmas song and puts a Shrek twist on them, can't say that I enjoyed this one at all and none of the new lyrics felt very inspired.

Two clips starring the characters from Madagascar followed, I found I kinda tuned out as they weren't anything fantastic but in their favour they were all perfectly in character, so it didn't feel like it didn't fit in with the series. The first one, with the group on the island of Madagascar was nice in the fact that they enjoy a warm, summery Christmas, much like here in NZ. Next we go back to Berk as they try to celebrate their version of the holiday, I've always loved Toothless, so whilst this didn't grab my attention fully, it was still fun. Kung Fu Panda rolls in next as Po tries to balance what is expected of him and what his heart wants, I do enjoy the relationship he has with his father and it gels well with the rest of the films without as much silliness as the films have. I don't like the new animation style being used for Home, so I didn't pay as much attention to this once.

There a few special features. If you feel like it you can have Shreks fireplace on your TV for a while, as various characters pop in and out of the screen now and then and Christmas music plays gently in the background. Shrek gives us their 12 days of Christmas, again, just in pop-up book style. Deleted scenes for How to Train Your Dragon which was interesting as it shows different stages of the illustrations and getting the ideas down. There are four songs to sing along with, words at the bottom for folks to follow along, as We Wish You a Merry Christmas becomes We Wish You a Merry Penguin and so on. My kids thought the 12 Days of Christmas, Madagascar style, was hilarious. The special features round off with two how to draw segments.

The second disc comprises of the full length Rise of the Guardians film. I quickly checked out the special features first, there's a behind the scenes one which gives an idea on the actors voicing the characters and the usual, here's what we thought would be good. One special feature that requires you inserting it into a computer or laptop, so I wasn't able to check that one out. Directors commentary which you can turn on if you want a more in depth look at the film and why they did what. The final special feature gives us four music video clips for Shrek, HtTYD, Madagascar and Kung Fu Panda. The movie itself is full of a great voice cast, good animation and a fun plot. My favourite part of Rise of the Guardians would have to be the depiction of each of the guardians, how they do their job and their personalities (I really enjoy their depiction of Santa, who has naughty and nice tattoos, whilst Tooth Fairy is gorgeous).

Overall, I'm not won over by all of the eight short clips but the kids enjoyed them and are happy to watch those again. At least I'm won over by the full movie that comes with this. I'm not sure on the price yet, as I can't find it for sale in NZ yet, but so long as it isn't more than $30 then I would say it's worth the price tag.