The Secret Life of Pets 2 review 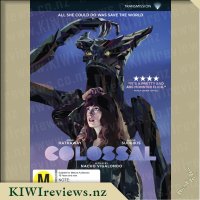 I like Anne Hathaway, so when a new trailer came out for a film of hers, I gave it a view. Whilst I was interested in the concept right from the first time I watched the trailer, it has still taken quite a while to actually sit down and watch it, luckily Netflix added it to their library recently and so a week ago I saw down to watch it with my mother. From what I had seen, I was expecting a comedy about a woman who finds out she is connected to a giant monster halfway across the world, what we got was a lot more than that and had both of us going "woah, did not expect that shift in the mood.". I felt that the movie did start off very slow, we had a hint at the monster at the start, then into present day where Gloria is clearly having issues with alcohol and promptly gets kicked out by her boyfriend. It might start off slow but by the end it is going full force.

The film does have comedic moments, when Gloria discovers this inexplicable link between herself and a giant monster that starts appearing in Seoul and causing destruction. These moments were fun and where we had expected the film to go but before we knew it the film began a dark slide into self-hate, jealousy and possession that had me genuinely worried for our main character. Sudeikis is the nice, friendly old school mate who gives Gloria a chance back home, but once he realizes his connection to her and the monster, it's a very fast descent into creepy, possessive and violent, given that I had only seen him in comedic roles before, I found this so well acted that he was a suitable scary character. There are a few special effects needed, CGI being used to mimic Hathaway and whilst they don't look 100% believable, they're not meant to, so I didn't find it an issue.

This is one of those very few films that gave almost nothing of what I expected but still delivered an excellent film full of tense atmosphere and concern for the main character.