The Writing On The Wall review

ProdID: 8437 - Fall; or, Dodge in Hell
Written by Neal Stephenson 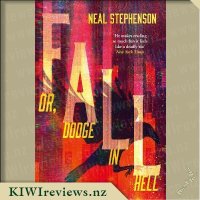 When gaming billionaire Richard 'Dodge' Forthrast is pronounced brain dead following a routine medical procedure, his family and close friends are left stunned, devastated, and forced to make difficult decisions. Dodge's will asks that his body be given to a cryonics company, owned by enigmatic tech entrepreneur Elmo Shepherd, whose business practices give Dodge's family understandable cause for concern. But when Dodge wrote his will he didn't anticipate that one day he'd be declared brain dead. He also didn't anticipate his brain being turned on again.

Years later, an astounding achievement in technology will allow the human race to defy death itself, giving birth to the Bitworld, an eternal afterlife. But this imagined state of perfection is not all that it appears to be...

SHINE: Make Them Wonder What You've Got
Rating: 8.5

As a person who is fascinated by words, my initial impression on glancing at the first chapters was that Fall; or, Dodge in Hell was going to be a book which derived its character names from many cultures! However, I am also addicted to fantasy and science fiction, and, having a background in computing as well, I could see that this might be a book that would appeal on many levels. Having come to that conclusion, I settled down to read the book properly. it is a large volume (nearly 900 pages) so I took it with me on a plane trip so that I could read it without interruptions.

The story starts with a very ordinary situation, with no hint of the subsequent developments in multiple directions. An apparently decent man (Richard Forthrast, known as Dodge) undergoes surgery and dies as the result of a complication. Nothing unusual there - apart from the fact that, having sufficient funds to do so, he has made arrangements for his body in the event of his death. However, cryonics has developed since the time this process was included in his will. From whole body deep-freezing to preservation of just the head to storing the connectome alone, procedures have changed considerably over the years. The new process involves computer scanning of the network of neurons and synapses within the human brain, and then uploading the data to the cloud - presumably so that the dead person's persona can be "revived" at some time in the future.

The book then alternates between Meatworld (the world of the still living) and Bitworld (the world of the "afterlife" or an alternative universe - sometimes it appears one and sometimes the other). The writing style dedicated to the two worlds is very different. The Meatworld sections are written in everyday language and are populated by characters who could be considered as everyday humans, flawed though they may be. In Bitworld, however, the writing style is more formal, often reflecting the style of the King James bible with its occasional use of words now considered obsolete and its slower pace. The Bitworld narration starts in the void and then begin to develop as Dodge's brain processes kick back into action. It is interesting that he is known as Egdod, a reversal of his own name - almost as though the new world is a mirror image of the old. (Egdod was also the name of his avatar in a computer game he had worked on.)

Not only the names, but also the mythologies in the Bitworld sections, are drawn from many sources. Greek and Norse are the obvious ones - foreshadowed in the two history books which Dodge bought for his grand-niece Sophia at the very start of the book - but there are also elements of other systems both documented and imaginary. There are clear influences from Asia, Oceania (including the borrowing of the word mana), and Africa, as well as links to Judaism and Islam. Even modern American "mythology" appears in the form of Fake News, and the whole internet subculture (known in the book as Miasma) contributes on many levels. In short, this is a kind of pastiche of Paradise Lost, Genesis, Brave New World, and several Icelandic sagas!

Fundamental to the success of Bitworld is the idea of choice. Not only do "souls" (the generic word for living beings) choose to some extent their own appearance and habitat, but there is also the ability for some "souls" to reproduce rather than relying on new uploads from Meatworld. The progenitors of the breeders, unsurprisingly, are Adam and Eve and the first food of sustenance is an apple! Add to this the name of the entrepreneur who in Meatworld took over the cryonics firm who were holding Dodge's data - Elmo Shepherd - and transfer him to Bitworld as El, and you have the Hebrew name for God! No coincidences there. Those who choose to follow El are those who just might succeed.

I found the last section of the book somewhat incomplete in comparison to the earlier part of the story. As Bitworld became more and more diverse, it was harder to keep track of what was going on or who the enemies actually were. The first section was relatively concise and easy to follow. I got the feeling that the story should have stopped around the end of Part 10, and the rest developed into a second volume: the last chapters were quite rushed in comparison with the rest. Nonetheless, it was an intriguing read and left me with plenty of unanswered questions as to where cryonics was heading, and what developments I might see in my own lifetime.

One thing that remained unanswered was what the ultimate fate of Bitworld might be. Given that it was - presumably - dependent on people (and their team of robots) in Meatworld, what would be the result if the connection was suddenly severed? Could it survive independently? It is never made clear where the data that was once human has gone - whether there is a backup copy in Meatworld, or whether there are no backups and the original is now exclusively in Bitworld. Is it a case of existing only if another entity is aware of your existence? What happens if there is nobody left to see? In effect, society in Bitworld is no better than that in Meatworld; the same cliques and prejudices and disappointments are there, and no doubt Facebook is just around the corner, so perhaps in the end it does not matter.

TWO FRIENDS
Wynn and Jack have been best friends since their first day of college, brought together by their shared love of literature and the great outdoors.

THE ADVENTURE OF A LIFETIME
When they decide to take time off university and canoe down the Maskwa River in northern Canada, they anticipate the ultimate wilderness experience.
No phones.
No fellow travellers.
No way of going back.