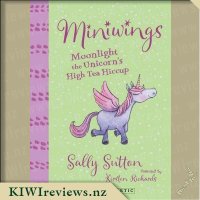 Sssh... NOT for parents! You can keep a SECRET, right?

Clara and I have a herd of tiny, talking, oopsie-whoopsie, flying horses - and they're REAL!

It's true. Those naughty Miniwings get us into so much TROUBLE, especially that RAZZLY-DAZZLY Unicorn, Moonlight!

This book is the sixth in this delightful series, each of which stars one of the personality-packed, mischievous Miniwings in his or her own adventure. The full-colour illustrations are by Kirsten Richards.

My daughter adores the Miniwings books. She started reading them when she was 8 and is now 10 and still insists they are not to young for her. My 7 year old has also became a keen reader and is extremely excited to be able to go to bed and read alone (to old to read with her parents). She has just got into chapter books and has only read one Miniwings book so far but has already said that she wants to read this once she finishes her other book.

Once the KR box was opened the book was grabbed before I could blink and Miss 10 declared it was hers. She took off proudly to her room and started reading. It is a quick read with only 7 chapters. Each lasting only about 9 to 12 pages long with the majority of the page being taken up with a picture or zany writting. The font increases in size in many areas so the story itself does not take long. A little over 90 pages but a few of them a broken up with the Miniwings Dictionary of words and then an introduction to the Miniwings as well as the 'letter to the reader' telling you all about her Top Secret find of the Miniwings coming to life.

I read it in less than half an hour and out of all the Miniwings books this story would have to be my favourite. From the naughty Miniwings getting into trouble eatting the food to the mothers reaction to the cucumbers, to reading about all the yummy food and the explanation of the Eton Mess (which pretty sure is just Ambrosia) it was a very cute, fun read. My only issue was some of the pictures were not complete and seemed extremely weird only having half of the image coloured in. Seemed incomplete and found it would catch my eye as soon as I turned the page. I don't remember this being the case in past issues and I found it rather annoying.

These books are perfect for kids who are just becoming independant in reading. Or, like my ten year old who just loves the series. There are fun words to learn and its always amusing finding out what antics they will get into. It was a given the high tea party was not going to be smooth running but you are not quite sure where or when it will all go wrong. A very cute, fun, exciting book for young kids and for the older ones who still believe in magic.

Miss Seven has been enjoying reading more and more as she continues to gain command of the written word. This is the first Miniwings book she has read, and she had a great time. She became so absorbed in the story that she climbed up one of the fruit trees, made herself comfortable on a large branch, and read the whole thing on her own. Usually I read review books with her, but this time I had to read it on my own - after she had finished, of course! Luckily, although this is the sixth book in the series, it was a standalone, so that did not impact on her understanding.

As do all children, Miss Seven loves animals - the younger and cuter the better! She also has a collection of assorted soft toys that live on her bed, but as yet she does not have a unicorn - but who knows what will arrive in the future? The idea of two children having their own little herd of miniature horses was most appealing, especially when they came to life and did just the same naughty things that little humans do! Moonlight was especially funny because he was into food and so is Miss Seven - although, since she is growing fast, she does not have a podgy tummy like Moonlight. And she does not purr or wobble with delight at the sight of something especially delicious!

We both loved the illustrations. Miss Seven liked the sight of Moonlight's bottom sticking out from the cake and Great-Auntie Mavis' teeth flying across the room. I liked the diagram for Secret Cake Eating, although Miss Seven does not need a diagram to teach her how to do that - I think most little kids do it instinctively! The story itself is extremely funny; I had heard peals of laughter coming from the fruit tree, and when I read the book for myself, I realised why. The idea of a hat hiccupping is just too over the top. And the occasional insightful comment by Sophia makes it even funnier - "But that's how it goes with mothers. One rule for them, one rule for everyone else" is my favourite.

The Dictionary of Miniwing-ese at the back of the book is an interesting addition. Glossaries often appear in books that are written in another language so that the reader can check the meaning of an unfamiliar word, but the "dictionary" - which contains some variants on everyday words (like "fabbo" for "great"), and other which are more innovative (like "noggin-toppers" for "hats") - is a hilarious read in itself. All of the Miniwing-ese words used in the book are easy to guess at in context, but we found it intriguing to see them in an ordered list, and to realise just how many there were.

Now that she has encountered this book, I imagine that Miss Seven will be looking out for the first five in the series. She is keen to see what adventures the other Miniwings get up to. She also wondered if one day there will be a box set of all six books with six Miniwings stuffed toys included. I can imagine what would be on her Santa list then!

Christchurch Dreaming is a book full of optimism. It has been created by those who have known this region as home and is for people who love all that is great about Christchurch and Canterbury. In pictorial for, it takes the reader on a journey from its early years of establishment, through past tragedies overcome and triumphs celebrated. It shows the courageousness of Cantabrians who remained resolute after the recent earthquakes, and shares a ... more...