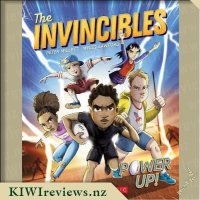 The Invincibles #1: Power Up! product reviews

One day, Tana, Scotty, Zinnia, Andrea and Muzza are zapped by lightning on a footy field and transformed into a team of POWERED-UP heroes known as THE INVINCIBLES. But the clock is ticking - they have 80 minutes before it's game over and their powers vanish!

So when Tricky Ricky hatches a sinister scheme to ruin the reputation of the mighty national team, the All Greats, it's The Invincibles alone who can save them. Can the team work together to use their powers before DISASTER STRIKES? This super-powered action and sports comedy features tackles, tries. titanium terrors and a ticking deadline that will make your hair stand on end.

With hilarious illustrations by Myles Lawford, including a set of bonus character collection cards, this book is timed to coincide with the 2019 Rugby World Cup in Japan (September-November 2019).

My seven year old has had a struggle in the begining of his reading journey finding it difficult to master word recognition and the learning of his letter sounds so we have had some resistance when it comes to reading books. As he has got older and friends have progressed to early chapter books his interest in picture books has been decreasing as he too wants to begin the chapter book journey. Though these are still a little difficult for him with some assistance he has been enjoying this new reading experience.

Books like the captain underpants series, or andy griffiths treehouse series have been really appealing for him as while being easy to read they have eye catching pictures and humorous storylines. The invincibles book was a very appealing book for him with bright and colourful cartoon style illustrations and interesting fonts used along with a hillarious storyline he was hooked from the begining.

I think the story of some normal school aged children developing some pretty incredible super powers was great and something children can relate to and we loved that the book had a sporting theme. The invincibles have a great quest to save the fate of the All Greats rugby team with the use of their superpowers but have a deadline to stick to until their superpowers run out. There is plenty of potty humour weaved into the superpowers and characters which my guy loved and kept him in hysterics as we read the book together.

I think the author has done a great job to create a unique group of superheroes in this book with a mixture of both boys and girls all with their own strengths but ultimately working together to save the day. The characters were all very likeable and we had some real laugh out loud giggles as we read more of their antics throughout the story. My son loved the removable character cards included at the back of the book so I think this was a neat addition as a reminder of the characters.

The book also hints at more Invincibles stories to come which is very exciting and we will definitely be on the look out for more releases coming out. The book has everything a new reader will love with humour, pranks, and super powers weaved in to create a super exciting page turning story. 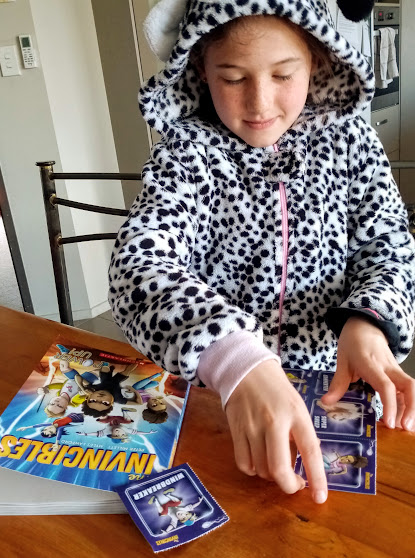 Miss Seven looked at this book and immediately said she thought it would be really good value because there were lots of cool pictures but also plenty of story so she figured it would keep her busy for quite some time. She likes books that have plenty of humour; it was not long before she was reading it aloud to me with frequent pauses so she could giggle. As a soccer player herself, she enjoys stories about football of all kinds whether soccer or rugby, so the theme appealed to her as well.

There are plenty of topical references to items that modern kids are familiar with - robotics, cell phones, and electronic scoreboards. This meant that Miss Seven could relate to the world of The Invincibles as they were just like other kids she knows. Apart from the magic powers, of course - but then, what child would not want to be able to zip up to the moon whenever he or she wanted to?

Miss Seven thought the toilet humour was hilarious. In her opinion, the funniest picture in the whole book was the image of Scotty issuing a supersonic fart and blasting the R-BOTS to the far end of the field. And as for the idea of his bottom catching fire as he farted while re-entering Earth's atmosphere, that was also extremely funny although she also thought it might have been quite painful when he tried to walk around with a burned bum.

The detachable cards in the back of the book were an instant hit - in fact, she did not want to settle to reading the book at all until she had removed all six and spread them out on the table. They were a useful reminder of who the characters were (five children plus a sheep), providing a useful summary of each one's super-powers and position in the team. She pointed out very quickly that one of Sheepy the Sheep's super powers was Power Poo - continuing the toilet humour theme. (Even the villain, Tricky Ricky, the Dunny Buddy entrepreneur, has made his money through promoting toilet sales!)

Aside from the humour, however, there is also a positive message to young children about gender stereotypes and teamwork. By the end of the book, the five children are well and truly on the same team, ready to work together and to look out for each other. Each has chosen a unique identity to secure a place on the team, and Sheepy the Sheep has survived his fall, much to everyone's relief. And Miss Seven was delighted to see the message "Look out for more Invincibles" on the book's endpaper as she realised that meant there would be more in the series!

What do babies do at night, when everyone else is asleep? Join Baby Brenda and her gang and find out!