« All That I Am review 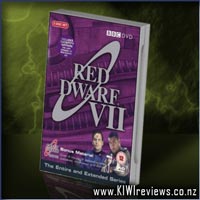 Disclosure StatementFULL DISCLOSURE: A number of units of this product have, at some time, been supplied to KIWIreviews by the company for the purposes of unbiased, independent reviews. No fee was accepted by KIWIreviews or the reviewers themselves - these are genuine, unpaid consumer reviews.
Available:
January 2006

When the generator goes down in the middle of the night, the crew has to crawl through the mile-long labyrinth of service ducts to restart their engines. On their journey they discover a few surprising things about one another - including what Lister once did on top of a crate of canned asparagus.

Meanwhile when two realities converge, the Dwarfers undergo their most terrifying ordeal yet - they bump into a real, live human woman who's attractive and nice.

Well, this is the Dwarf series that almost wasn't! With a 3 year gap beween the end of shooting Series 6, and the start of Series 7, the departure of Chris barrie aka Arnold J "Smeghead" Rimmer, and a host of finacial issues... oh, and not forgetting the splitting up of Rob Grant and Doug Naylor, the powerhouse duo that started it all.

This is, however, the little series that could, with not only it's very existance proof of the determination of the staff and fans, but also the fact that it not only has the usual 8 episodes, but also 3 extra 'extended versions' and a bounty of bonus extras, filling a stunning 3 DVDs edge to edge.

The scriptwriters went to town on this series, with some wonderful plots well-developed, including my utter, all-time favourite, 'Ouroboros', and the very-funny 'Stoke Me a Clipper' in which we learn a few things about Arnold 'Ace' Rimmer... and which also is the almost-final episode Chris Barrie features in... (He makes a few brief appearances throughout other episodes, but this was his last majority-feature episode.)

The only down-side was the special effects. Limited time, short budgets, and technical difficulties caused the effects to be totally sub-standard... a sentiment echoed by the production team themselves, in the collector's book that accompanies the discs.

overall, despite it's pitfalls, or maybe because of them, this would have to be one of my favourite series of Red Dwarf... and one I am over-the-moon happy to add to the collection. It will be with great interest I see how they manage to top this with Series 8.

Conducted by Eirian Owen and featuring presentations by the whole of the The Aran Mountain Male-Voice Choir, as well as trio acts by Tom Evans, ... more...