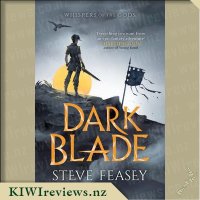 Lann knows nothing of his mysterious past, but by his fifteenth birthday he will come face to face with destiny. For Lann must wield the Dreadblade, an ancient sword forged to defeat terrible monsters. Across the mountains a King has been murdered. His daughter, Astrid, is a warrior with no desire to bear the crown. Only she can uncover her father's killer before her brother is framed for the crime. Evil is stirring. Lann and Astrid are the kingdom's last defense.
Together, they must face the greatest darkness their world has ever known.

Dark Blade is the first in a new series, Whispers of the Gods, with a second book already planned for release next year. Lann was left in a barn, raised by a mother who adored him and a father who never truly accepted him as his own. Soon enough Lann learns that he is half-god and his fate is tied to the aptly named Dreadblade, a sentient weapon who craves only to destroy evil (which as we find as the book progresses, isn't always the monster you think it could be). We don't get much in the way of character description, something that I liked very much, though I did find that Astrid began to look very similar to Astrid from How to Train a Dragon. This irritated me, as the book has very much a viking vibe to it and her name (along with her brother) had the most simple, easy names when compared to Fleya, Helba, Gord, Kelewulf and so on.

The book itself is fast paced, the chapters aren't too long whilst also ending enough to have you wanting to turn to the next one. I did find that by the end of the book I had forgotten that Lann must be close to only sixteen, and therefore Astrid, Kelewulf and Erik are all far too young for the weight placed upon them, but of course, a teen fiction is going to have teens razing or saving the world. By far my favourite character was Fleya, her majik was more earthy and connected to the wider world and despite the fact that we still know so little about her by the closing page, I find myself hoping to see more of her. Some of the big issues in the book are resolved by the end, it is a sense of completion so I won't spend my days dying to know what happens next yet it's open enough that I will happily read the next in order to see just what they'll come up against next.

I enjoyed this book far more than I expected and look forward to the next.

Kids, cook up a storm with these recipes created just for you! Have fun being playful with food and make everyday food out of the ordinary with these awesome recipes. So whether it's Piggy Pasta, UFO Cookies or Spooky Smoothies, we guarantee you will have a blast in the kitchen!