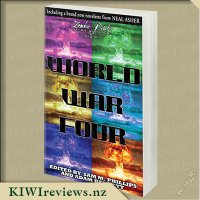 Disclosure StatementFULL DISCLOSURE: A number of units of this product have, at some time, been supplied to KIWIreviews by the company for the purposes of unbiased, independent reviews. No fee was accepted by KIWIreviews or the reviewers themselves - these are genuine, unpaid consumer reviews.
Available:
via Amazon Online

I was intrigued to hear of this publisher, and this title in particular. Neal Asher mentioned it to me in a chat and I had to go look it up... and I am so very glad I did. 400+ pages for under $6 makes the eBook version incredible value for money.

The first offering is action-packed recount of a rescue mission where details can be need-to-know right up until the moment you find out in the field. Titled "The Package" and written by Brian McGowan, it is a first-person recount of a special ops team being sent into an active war zone to recover vital intelligence for one side... but as with all things, there is a catch. A moment of transition, where the morals of the agent are balanced against the completion of a mission, and how it can mean a simple op can become a fight not only for one's life, but also one's soul. Then it's straight into the fun and absurdist tale World War Fowl by Heather Kim Hood, a number of battles being fought on multiple fronts by multiple factions... and what it really means to be a chicken when faced with an invasion. It started off well, and just kept getting better. Told in a matter-of-fact, deadpan style that underscores the edgy unreality of the story itself. Having once looked after chickens, it resonated with me. I loved it.

Jackson's Revenge by Adam Bennett takes us on a trip down memory lane from the perspective of a soldier who beat the odds and returned home alive, but too late. Then spent the rest of his life trying to outrun the memory of his one moment of weakness. The moment when Justice meant not taking the civilised option. "Monitor Logan" by Neal Asher drops in next, taking us on a Wild West adventure around a distant star. How far can loyalty and dedication take a man in the pursuit of lawful order on the edges of a sprawling territory where the lawless thrive? For fans of Asher's heavier stories, the tone and feel of this are very familiar, and yes it is set within the bounds of his Polity Universe - more than enough to warrant giving it a read. I can't get enough of his worlds, especially the Polity ones.

The next offering - "Cold Fusion" - is from Sam Phillips, and it is a first-person POV tale of a man trying to find himself while lost in a mental landscape the likes of which Alice would expect to see in Wonderland. Whether his torments are real, or purely a hallucination his mind has cobbled together to try and protect him is not clear, nor is it in any way relevant. This leaves the tale open to be enjoys as a juicy nugget of surrealism in the spirit of Dali or Bosch. This fantastic trip is followed by a tale of aerial combat called "Yudde Ke Khel" by Mel Lee Newmin. This translates from Hindi to "War from Games/Sport", however the more common usage is "Yudh Khel", which is "Wargames" and oddly enough, anyone who has ever worked in a call-centre will immediately empathise with this tale. It is a clever glimpse forwards to where high-bandwidth communication overlaps even more with the military mindset. The twist is right at the end, and there is a neat little secondary twist within it that gives the tale an extra frisson of delight at the revelation. I quite enjoyed it, though I will admit the style is a little timid in places. The reason for this become evident with the twist, and I have seen this trope handled worse, that's for sure. A good yarn none the less.

"Subject Galilee" from Rich Rurshell comes next, with a tale about a loner who has built a commune of peace in the midst of a global battle between two megacorporations, who settle patent violations with landwars. Galilee is effective without being overly violent, and has some neat tricks up his sleeve, but when it comes time for the truth to be revealed, it is done as a whisper in the wild, not as a shout to the world... but the final result will leave the entire planet changed. "War Pig" by Gregg Cunningham takes time travel into the battlefield in a war that must end... but possibly not on the first go-round. Temporal physics and the so-called butterfly effect are tropes that have popped up in science fiction for decades, all the way back to H.G. Wells' famous time machine, and many fairly modern TV shows have explored time loops, paradoxes and other esoteric side-effects of bouncing around in time, but this is the forst story I have come across that takes it into the battlefield with a protagonist that knows so much, yet has failed to grasp the one thing that can mess up the perfect plan - the human mind's inability to really understand that in such situations, free will is a dangerous but appealing illusion.

One of the most poignant stories in this anthology is "Joey" by James Pyles. It gives us a view into the mind of a grandfather who is facing an alien invasion of Earth a decade after humanity decided to wreck havok with a nuclear war triggered by Syria and Israel. In the story we meet Joey, his 6-year-old grandson, and through their conversations we discover the history prior to that moment. Through jarring breaks in reality, we discover the full horror that Grandad Andy is living through as he tries to meet up with local resistance members preparing to fight back against the alien invaders. Blake Jessop gives us an intriguing tale in "This Sky is Mine" - The last world war ended with all sides agreeing to a cease-fire. The Cold War is over, and now the military has evolved into a private security contractor service. Aircraft pilots fly air shows, drones are the new war horses, but as always, there is a twist. Nicely paced and with elements of dry 'warrior humour' thrown in for light relief, this is a tale that could be all too prophetic, if we let it. All hail the new god.

There are eleven other stories in the collection, but to be blunt, if I give a mini-review of each of them this is going to be an unreadably long review. Suffice it to say, this is a collection of wild and wonderful tales by some very talented, if underappreciated and under-recognised authors, that is well worth the price it is on offer at. For $17 you can order a hardcopy, and call me old-fashioned but there nothing wuite like the feeling of curling up by the fireplace on a rotten cold night, with a glass of something warm in one hand and a real paper book in the other, whiling away the evening hours lost in a multitude of worlds.

Overall, this is a great offering, and I hope to see World War Five coming out of The Captain's cabin one day.

Fuzzy started as a scribble, just a scrawly little doodle, a smudgey sort of something at the bottom of the page. He nibbled, chomped and gobbled scrumptious words and tasty colours. They made Fuzzy grow ... and grow ... and GROW! Hello!