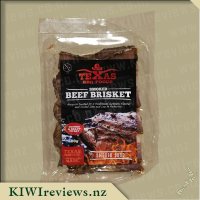 Disclosure StatementFULL DISCLOSURE: A number of units of this product have, at some time, been supplied to KIWIreviews by the company for the purposes of unbiased, independent reviews. No fee was accepted by KIWIreviews or the reviewers themselves - these are genuine, unpaid consumer reviews.
Available:
in supermarkets nationwide

We use real NZ grass-fed Halal beef. We season it with our own recipe rub, smoke it with mesquite and slow cook for up to 20 hours until it is so tender it falls apart and melts in your mouth.

I was first introduced to brisket through a friend. They were having a meat party--a Meatfest, if you will--to celebrate their birthday, but they supposedly had some portions of meat that had been slowly cooking since 9pm the previous night. That meat was incredibly tender, juicy, and absolutely delightful. But I am a busy man and don't really have time to wait around for 20 hours for a meal. And this is where this Texas BBQ Foods Beef Brisket comes into play

The idea behind this product is simple. A beef Brisket that you don't have to wait hours to prepare. Brisket is a tough cut of meat, but long and slow cooking allows the connective tissues to breakdown and gelatinize, creating a rich and tender meat. This product has had this process done already, leaving only a quick reheat between you and a hot meal. Interestingly, it is generally recommended to indirectly reheat the brisket over an hour, to prevent the meat from drying out. So I was curious to see how this product would turn out with its shorter cooking times.

The packet itself doesn't necessarily look the most appetising, to be honest. It has the look of a cheap vacuum-packed jerky that you can buy from the petrol station. Looks can be deceiving though.

The packets cooking instructions are very easy. you can eat it cold as is, or you heat it up. Heating up involves chucking the package in the microwave for 30-40 seconds, or immersing in hot water for 5-10 minutes. It feels strange being told to place thin plastic into the microwave, even for as short as 30 seconds, especially without being told to open the pack or anything. In hindsight, It might pay to start a tear in the plastic before microwaving. the top and bottom of the packet looks frayed in a way that would tear easily, but once the plastic is warmed, it just warps and bends, so I ended up using a knife to slice it open.

As you can tell, I went with the microwave method when it came to cooking this product (I'm always going to choose the easiest, less-fuss method). It comes out of the pack already sliced into strips like roast beef from the deli, but with a much richer and darker colouration. There isn't a lot of sauce, which can be either a good or bad thing. On the plus side, it isn't very messy to deal with, but on the negative side, it can make the meat a little dry (one could posit that the immersion cooking method would lead to a much juicier end product).

There's definitely a "home-cooked" flavour to it, with that slight hint of burnt edges. While it was slightly dry, it is still very tender, and can easily be pulled apart with a fork or two. That being said, because the meat is already sliced thinly, pulling the meat apart almost creates a mince, which is a little messier to deal with.

I certainly did enjoy the flavour, not it is not particularly strong and would recommend combining with a sharp sauce to complement the deep flavour of the beef. While unconventional, a thick balsamic mint sauce works really well with this meat, especially when used in wraps.

Compared to other meats, this brisket is on the dearer side, but considering the amount of time that goes into the preparation of the meat, it isn't inexplicably expensive. The 200g size pack lends itself more to in-family dinners, rather than entertaining guests, as the portion size isn't the largest. To get the best value from this product, it would be best to use it for a layer in gourmet burgers atop a regular beef patty, or on items like wraps and pizzas, or potentially a really nice lot of loaded fries (pulled beef brisket, with cheese and red onion would be delicious!).

Brisket is not something I had tried before until just recently when my family and I decided to go out for a dinner one night and ended up at a new restaurant that had opened up which was an American BBQ style restaurant. My partner decided to order the pulled beef brisket burger and I ordered a mixed plate which contained beef brisket as one of the meats. We both immediately said that we loved the taste, tenderness, and flavours of the brisket which we had ordered and so when I saw this product up for review I knew it was well worth trying at home.

The first thing which impressed me about this product was the ease of preparation - the bag simply could be heated in the microwave for 30 - 40 seconds or it could be immersed in hot water over the stove for 5 - 10 minutes in the bag, both simple instructions, no fuss, no mess, and ready in minutes or even seconds. Having a microwave at home I opted for the microwave way of heating and was happy that after exactly 30 seconds my meat was piping hot and ready to serve. The meat comes pre-sliced which I quite liked and was in even sized pieces of just the right thickness. The smell of the heated meat was beautiful and smelt slightly smokey.

I decided to replicate a meal similar to one of the first ways we had ever tried the beef brisket and made some fancy beef brisket like burgers. I had been given some delicious sourdough ciabatta at work the day after receiving my meat so used this in place of bread rolls. After topping the ciabatta with BBQ sauce, mayonnaise, lettuce, tomato, onion rings, thinly sliced bacon, and camembert I added a generous amount of beef brisket. There was enough to go around all 3 of us in the house and none of us were skimping on meat. Wow talk about amazing taste sensation the meat was outstanding, so tender and melt in the mouth and full of flavour, my partner was raving, and Miss 6 well she must've enjoyed it as it was the first thing to go off her deconstructed burger and she was asking for more, it means it must've been good as she's hardly a meat eater.

As far as easy to prepare meals and meats this is well worth buying, the price isn't too bad for the amount you get and for the time you save. If there was anything I'd change it would be the amount of fat on the top of the meat which isn't my cup of tea, however, I do know a lot of people would like this, super easy to take it off if you don't! 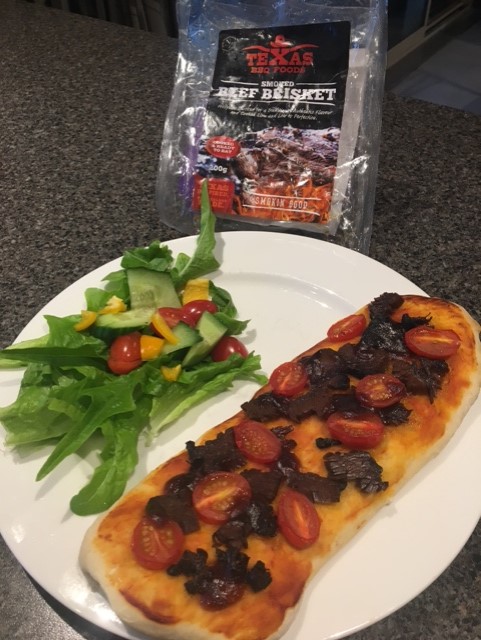 Brisket is a funny word, not one the children had heard before and therefore one that instantly aroused their suspicions: both said they were sure they would not like it! We had planned to try some on pizza because we had a really nice recipe that used hickory sauce and tomatoes but did not require many other ingredients, so before putting the pizza together we opened the pack, took out two strips of beef, and cut them into small pieces for everyone to try. As we had thought, the grown-ups liked it. However, the children were pleasantly surprised to find it was really quite tasty and we had to hide the rest or Miss Seven would have eaten the lot!

I can remember being served undercooked brisket as a child and being quite unable to eat it. It was one tough cut of meat! However, this meat was beautifully tender - no stringy bits, and no toughness anywhere. The secret is in the cooking: after seasoning, the meat is slow cooked for hours until it is so soft you barely need to chew it. The texture was perfect: it melted in our mouths and I could understand why Miss Seven was so taken with it.

The flavour is delicious, not too strong, but nicely smoky with the slight aftertaste of a spice I could not quite identify - possibly juniper? I was also pleased to see that this is a low salt product. Many spicy foods rely on herbs and spices other than salt to enhance the taste; this is a bonus when so many ready-to-eat products are high in sodium, especially those at the budget end of the range. It is worth paying a little more to be sure that what you are eating is not an unhealthy option. The slices are moist and slightly greasy, but not overly so, and are fine to eat straight from the packet without reheating at all.

Having done our initial evaluation, we organised the rest on to home-made pizza bases. Our recipe called for smoked brisket and salami pieces, but we decided to omit the salami so we could get the full effect of the brisket. The other main items were tomatoes and hickory sauce. Cheese was not listed in the recipe, but some of the pizza bases already had a cheese topping while others were plain, so we did not add any more. We cooked the bases till they were almost done and then added halved cherry tomatoes and pieces of brisket to finish them off; if we were to have added the toppings at the start of the cooking time, the brisket would have dried out too much.

We served the hickory sauce at the table as we wanted to try the dish both with and without it, and each person was given a piece of both pizzas - with and without cheese topping. I was glad we chose to include the hickory as an optional extra as everyone liked a different combination! Miss Seven did not like the sauce and she chose the cheese base over the plain. Mr Nine liked the plain base with no sauce - he said he wanted to taste the brisket! The adults all preferred it with sauce and cheese as well.

I wanted to try another recipe - possibly adding some brisket to pasta just before serving - but that was not going to happen; it was so good that we had finished the entire packet. Oh well, we will just have to go and buy some more!