« The Ode Less Travelled - Unlocking the Poet Within. review

The Wheel of Time : Knife of Dreams review 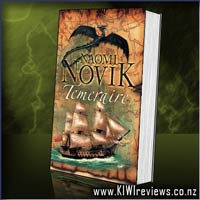 Disclosure StatementFULL DISCLOSURE: A number of units of this product have, at some time, been supplied to KIWIreviews by the company for the purposes of unbiased, independent reviews. No fee was accepted by KIWIreviews or the reviewers themselves - these are genuine, unpaid consumer reviews.
Available:
20 Jan 2006

The Napoleonic Wars revisited... with an extraordinary difference...

Combining the cool prose of Jane Austen, the masterful storytelling of a Patrick O'Brian and a magical element all of her own, Naomi Novik is set to take the fantasy and historical fiction market by storm.

As Napoleon's Grand Army tear Europe apart, his vast armada is poised to engage Admiral Nelson's smaller fleet and threaten Britian. But the struggle is over more than land and sea, for both sides have an air force. And the fiery death they rain down upon their enemies has nothing to do with gunpowder - it comes from the very guts of the beasts they are flying: dragons.

I found this book rather surprising. When I first read the blurb on the back, I thought 'oh yay, another war type story'- but it had dragons, so that made it bearable to give it a go. Besides, the previous reviews for this series made it sound reasonably interesting, so somewhat hesitantly, I started reading. It wasn't long before I was completely immersed and having a hard time pulling my nose back out of it so that other things could be done- such as work, family life, etc.
The descriptions of the battles and war tactics were easy to follow, not overdone, and it was thoroughly enjoyable following Captain Laurence as he went from sea Captain, to the doting rider of Temeraire in a world where Dragon Rider was akin to a dirty word, and certainly not what was considered a decent career in proper society. Even Laurence had been horrified when Temeraire chose him, fresh out of the egg.
If you don't mind a bit of military jargon, and are looking for something with only a taste of fantasy to it (the dragons are really as close as this book gets to being anything Fantasy orientated), then Novik's series about Temeraire and his beloved Captain is definitely worth your consideration. As it is, having just finished Book #1, I'm now heading off to eagerly dive into Book #2 - Temeraire: Throne of Jade!

The back of this book reads rather strangely, and I'll be honest and say I was unsure about the book as a whole...

However, within the first few pages I was caught in the flow of the words as Ms Novik started the book with a battle at sea between a French ship and a ship of Her Majesty's Service, and the consequent capture of the French ship and the surprising contents of the ship's hold - a dragon egg!

The story follows the Captain of the ship, Will Laurence, as he unexpectedly becomes the person the dragon allows to harness it when it is born. thus requiring he leaves his seagoing life, walks away from the woman he is 'stepping out with' and his family, and joins the Aerial Corps - those that fly the dragons.

Will gives the dragon a name. Temeraire.
And the tale that is told is that of Will and Temeraire growing together, learning together - Will to be a member of the Corps and to love his wonderful new companion, and Temeraire to be battle ready and in the meantime, soak up any and all information that Will can find him, ranging from mathematics to history, all read to him during quiet moments by Will - it's hard for a dragon to turn pages don't you know...

Of course, behind the growing partnership that blossoms between these two characters, is the Napoleonic war... and Temeraire and Will must train and battle as part of a squadron...

I was totally entranced by this book, and can honestly say I was disappointed when it ended. I want to know what else happens in the life of Temeraire and Will, as the story only covers a surprisingly short period of time, less than 2 years.

As a first novel, Ms Novik should be very happy with herself, this is a fine contribution to the Fantasy genre.

"I've always wanted to go to Antarctica. I never thought the Antarctic would come to me." : by Stephen Jaquiery.

It was a sight we thought we'd never see - icebergs off the coast of southern New Zealand. Otago Daily Times photographer, Stephen Jaquiery, was the first on the scene in November 2006. His magnificant photographs not only inspired a new sightseeing industry, but also provoked an avalnche of interest from ... more...