Home > Categories > Entertainment > Television > The Pacific: In the Wake of Captain Cook with Sam Neill review

ProdID: 8203 - The Pacific: In the Wake of Captain Cook with Sam Neill
Type of Show: Documentary Mini-Series 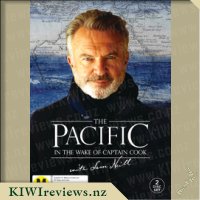 The Pacific: In the Wake of Captain Cook with Sam Neill product reviews

250 years after Captain James Cook began his epic exploration of the Pacific, Sam Neill journeys in his wake, uncovering accounts that resonate from those times on both sides of the beach. Visiting the islands and lands where Cook went and meeting the descendants of the people he met, Sam hears their stories. In this six part series, Sam explores the trials and triumphs, disasters and delights that followed. Was Cook an instrument of imperial expansion or an enlightened explorer? Whether admired or admonished, Captain James Cook is forever linked to the Pacific, its heritage, and its future.

This series is also known as Uncharted With Sam Neill.

I knew nothing at all about this series before I started watching it - but as soon as I began, I found I could not stop; I was compelled to keep watching, and ended up viewing the entire series over the course of two days. I think what really drew me in was the way that all six episodes presented the common theme of the aftermath of invasion - what happened to various Pacific civilisations after they were visited by foreigners, how this invasion of their way of life affected them in the years to follow, and how they have adjusted in modern times to the necessary changes. The series is not perfect; I had a few reservations about the way some of the stories were presented from a "them-and-us" angle, but most of the time Sam Neill paid due respect to the people he was interviewing and appeared to be genuine in his desire to acknowledge their perspective on their own stories and their right to celebrate their own cultural links.

The cinematography is stunning. Each episode begins with a visual collage representing the different islands visited by Captain Cook and his crew in the Endeavour, and subsequently the Resolution. It then follows with a recap of what happened in the last episode, and introduces the new island or islands which will feature in the current episode. Each episode is also prefaced with a warning to those who may find some of the images and concepts disturbing, specifically Aborigine viewers and those from Torres Strait. This is anthropology in action; other topics include cannibalism, photographs of real mummified heads, and some nudity - all very much in context, but with the potential to upset some viewers.

Having been raised myself on a diet of Malinowski and Mead, I was personally fascinated by the way in which Neill engaged the various people he interviewed - encouraging them to tell their stories, and reserving judgement. In Neill's view, Cook emerges as a largely sympathetic coloniser, who visited various lands and showed himself to be for the most part accepting of new ways and unfamiliar traditions. As in all stories, there are two sides; Cook represented both good and bad, just like people in some of the societies he visited. His ultimate aim was to find the Great Southern Continent and then the Great Northwest Passage.

And I learned several things I had not known before. In the first episode, Tupaia is introduced - a man I had never heard of, so I was astounded to discover how important he was in Pacific history, and the extent to which he became Cook's right-hand man. He was a skilled navigator and painter whose knowledge and amazing talents not only facilitated Cook's travels on his first voyage on Endeavour, but also ensured that much of what he saw and discovered was recorded for future generations. He first teamed up with Cook in Tahiti, and subsequently travelled with him to New Zealand. From New Zealand, they went on to Australia - the biggest of the Pacific islands. Tupaia was taken ill and died towards the end of this first voyage,

Another historical figure I did not know a lot about was Joseph Banks. He is presented as a privileged rich boy whose money could buy him anything. Banks sketched much of the flora and fauna he saw, ensuring his place in the art world. He gave his name to a plant genus - banksia - and Banks Peninsula in Canterbury is named for him. However, he was also the man responsible for suggesting that New South Wales be commandeered for a penal colony. And despite Cook's work as a cartographer, mapping Tahiti, New Zealand and part of Australia, it was Banks who was recognised by Britain as the more important figure due to his high birth and self-importance. Tupaia, on the other hand, was recognised only long after his death for his contribution to Cook's discoveries.

Cook returned to the Pacific a year later in a new ship, the Resolution, and headed for Antarctica - again, in his search for the missing continent. Eventually he returned to the South Island of New Zealand for rest and recovery before travelling on to Tonga, Easter Island, Vanuatu and other islands. A highlight is the visit to a live volcano by Sam Neill, retracing what Cook may have done but with clear reservations for his own safety. This is one segment of the film where Neill is not acting! Subsequently, Neill traces Cook's visit to the Great North-West Passage (Canada and Alaska), back once more to Tonga, Tahiti and New Zealand, and finally his trip to Hawai'i (originally called the Sandwich Islands by Cook) where he lost his life.

As an interpretation of historical events, the series is eminently watchable. There are moments of humour to temper the harsher events of Cook's travels, especially those involving unusual foods and certain items of clothing! There are some wonderful paintings and line drawings interspersed throughout with live film footage. All of this brings the story to life. The soundtrack picks up on the rhythms and harmonies of different Pacific islands, evoking a multicultural world where no two places are alike. Whether or not the viewer agrees with Neill's interpretation of Cook's story, it is compelling viewing and a series I could watch several times over and still not be bored.