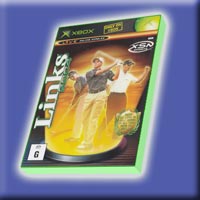 The best-selling game in PC Golf brings the most realistic tournament competition to XBOX!

Compete in the frist truely virtual sports league for XBOX.

Features:
- Experience the Realism. Experience real golf physics and TV-style tournament action with highly detailed envirnoments that can only happen on XBOX.
- Become a Golf Champion. Play as - or against - top pros such as Sergio Garcia, Masters Champion Mike Wier, and LPGA Champion Annika Sorenstam.
- Global Competition on XBOX Live. Play a round with friends anywhere or challenge the world in real, online tournaments at www.XSNsports.com

Play eight of the world's greatest courses, including the Legendary Old Course at St Andrews Links and a bonus fantasy course.

Whilst I cannot play an actual round of golf to save myself, and not really being one for a computerised version either, I found this to immensely easy to start playing, and I got dragged into the addictiveness of it very quickly.

The graphics are stunning, and the audio is superb, even to the point where I used my first name for the profile, and during the game it keep using my name when talking about me, I mean how often does this happen in any game?

And as for the sleepness nights factor, I could easily spend a night playing this just to get to the next tour.

As for replayability, with me once i've done a game like this there is not really any reason to come back and repeat the same stuff over again.

Well, speaking as someone who REALLY hates the idea of hitting and then chasing after a little white ball, I found myself kind of turned off the idea of a game where you would be doing just that. HOW WRONG I WAS!

the graphics are superb, the flow of the game is seemless, and the use of special shots to show when you have hit the 'sweet spot' of the ball is fantastic.

I am rather glad I do not own an Xbox and this game, as I am fairly sure that I would not sleep. :)

I have tried, I honestly have, but I can not get to grips with golf. The physics are simple, the practice is IMPOSSIBLE! I just can't hold the club right, I can't figure out the right club for a shot, hopeless. Give me Mini Putt-Putt any day!

But then this came along. My first comment as I shoved the disc in was "Well, this'll be a dud for me, but gotta give it a go." There are times I am glad to be wrong. This was one of them. This game is COOL! Perhaps a little too basic in places, but beginner level has to be easy or we wouldn't buy it, would we!

The physics of the game are 99% true to form, the only glitches seemed to be in wind effects... the ball can't fly straight in a crosswind, no matter how good the golfer, it's phyically impossible to pull off some of the shots I did. But it was still great fun to sink birdie after birdie, the occasional eagle, and even a hole-in-one! Finishing an 18-hole course 12 under par was fun! And the ease with which you earn funds made upskilling your character a breeze in the early stages. I mean, $250 just for getting on the green 2 under par is easy money! 18 holes earned me over $10,000, which was only 1/8th of the way to an upskill, but the gameplay made it easy to stick with.

The controls take very little getting used to, thanks to the uniformity of Microsoft Game Studio's standardised interface and intuitive control system, meaning that swing control is a joystick wiggle and a button press away. So easy, even I got hooked after only minutes!

The environmental factors add a level of realism second to none; crowd commentary was appropriate to the shot in progress, the commentators were always on-key, even to the point of getting sarcastic about your club choices. The auto-caddy made starting out easy and educational, giving you the best club for the shot. You could over-ride it, and that triggered audio comments, but 99% of the time the club issued to you would be the better shot. HINT: It's fun to try and putt with a 1-wood, but not at all effective over short distances. A 10-foot putt with a sand wedge made for some hilarious stuff-ups. A light tap sent the ball off the green at warp factor 3, airbound.

I can only dream of playing this on XBOX Live, but I can easily imagine the fun you'll have putting with the pros on the other side of the planet. "XBOX Live - bringing sports fans closer every day" would be a cool slogan for this.

Overall, looking forward to getting my own console so I can play more of this one. Brilliant stuff MGS!