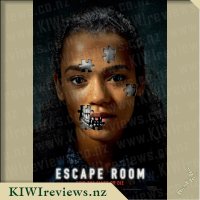 Disclosure StatementFULL DISCLOSURE: A number of units of this product have, at some time, been supplied to KIWIreviews by the company for the purposes of unbiased, independent reviews. No fee was accepted by KIWIreviews or the reviewers themselves - these are genuine, unpaid consumer reviews.
Available:
In cinemas 21st February 2019

Six adventurous strangers travel to a mysterious building to experience the escape room -- a game where players compete to solve a series of puzzles to win $10,000. What starts out as seemingly innocent fun soon turns into a living nightmare as the four men and two women discover each room is an elaborate trap that's part of a sadistic game of life or death.

Escape Room starts off pretty strongly, considering what it is. Six people inadvertently joining a high-stakes escape room game, forced to solve the puzzle to escape before they run out of time and are killed. This is effectively a Saw film with a new antagonist, bigger budget, and a targeted-at-youth rating of M(?).

Escape rooms are quite a popular recreational activity at the moment, even so, it is still quite interesting to see these characters taking part of their own free will. Usually, the rooms will follow a theme, and this is the case in Escape Room; each room with a vastly different look and feel to it. As far as the set-pieces go, these rooms are very well done. A lot of creativity goes into the planning of each space, and each scene makes great use of differing shots or colour grading to change how that room feels. Whether it be medium range shots with a very low saturation tinged with blue, to make the viewer feel colder and in a larger space compared to close up shots in a fiery red room which creates a sense of claustrophobia.

The characters themselves have minimal development and unfortunately spoils itself by choosing to focus on only developing certain characters at the beginning. Like watching an episode of American Idol, you know someone is going to be significant when they go off on a tangent about the person's life story. Rather one-dimensional characters, none of them are really all that likeable. Out of the six that are taking part, only two of the characters are really actively participating while the rest are just acting disrespectfully towards those trying to help. Which looking at the setup of the film does make sense, as these people are doing it for a cash prize--not for fun--but it is still rather peculiar to watch a group of frustratingly annoying characters who seem to instantly hate each other doing an escape room together.

As the personalities of the characters are so one-sided, you can't really blame the actors that were cast as they had little to work with. Taylor Russell is an unlikely lead protagonist, having no qualities that would make her a great leader. Deborah Ann Woll (who I absolutely loved in the Netflix Daredevil and Punisher series) is probably the strongest character there, using a lot of dialogue-free acting, and being the closest to a likeable character of the bunch. Jat Ellis, Tyler Labine, Nik Dodani, and Logan Miller are all rather forgettable.

It is unfortunate because the film starts off really well. The puzzles--while rather simple for a deathtrap--are still quite creative and fun. It isn't too noticeable, there is a fair amount of monologuing that seems to have been added after the fact, where the characters are constantly talking to themselves (great teamwork, guys) as they explain out loud their thought processes. A rather clear example of the studio not trusting the audience to be able to figure out the puzzles themselves, but overall it is all edited in a reasonably organic way. The flashbacks provide reasonable exposition but do feel like they couldn't figure out where to actually put them in.

Once they get to the fourth room, that is when the film takes a turn. It's as if the writers had no idea how to end the movie, and instead were pulling out every stop to try and ensure a sequel could follow from it. The film tries to complicate itself too much, adding in hints throughout that don't get any kind of payoff by the end, and just going completely off the rails, throwing in unnecessary scenes and making opposing changes to the personality traits of the protagonist. It changes from a logistically impossible, but fun mystery movie, into a poorly written action sequence.

There are potentially 3 whole scenes that were tacked on at the end that could have been removed completely, and actually made the film so much better. Removing all of the unnecessary baggage in order to push a sequel, just feels cheap, and ruined what was actually quite a fun film.

I'm not sure who the studio was really aiming this film at. I would have loved the M rating to have been upgraded to an R rating and actually allow some stronger death scenes to occur. The whole "look away at the last moment" thing really takes away from the emotional impact, especially when your characters instantly recover from anything that had occurred in the previous room. It all reduces the tension (which Escape Room still manages to provide), fear and consequence of action.

Overall, I enjoyed the film up until the final act. It is a bit like a less intelligent version of The Belko Experiment, and a less gory edition of Saw, with a bit of Cube thrown in for good measure. The creative setpieces are the appeal of the film, and as long as you are willing to have a laugh afterwards about how much the ending sucked, you'll come away with a positive experience.

It is tradition for all young witches to leave their families on the night of a full moon to learn their craft. That night comes for Kiki, who follows her dream and embarks on the experience of a lifetime.

With her chatty black cat, Jiji, She flies off to find the perfect spot in a faraway city. There, a bakery owner befriends Kiki and helps her start her own business: A high-flying delivery service.