« Talk to the Hand review 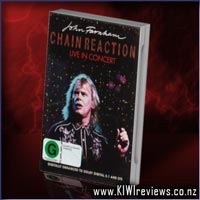 Disclosure StatementFULL DISCLOSURE: A number of units of this product have, at some time, been supplied to KIWIreviews by the company for the purposes of unbiased, independent reviews. No fee was accepted by KIWIreviews or the reviewers themselves - these are genuine, unpaid consumer reviews.
Available:
at quality music retailers

Having been a fan of JF since, oh, plenty long ago, and still having his first album on cassette sitting in my car's glovebox (yes, some of us still have old tape decks in the car), I was overjoyed to see John's artistic works finally make it to DVD. I had returned to NZ after a year of living in Aussy, a short time before this concert, and I was a bit miffed to have missed it, and so this DVD was a wonderful compromise, albeit 15 years late.

Showing John farnham at his peak, this DVD not only gives you his music at top notch, but for those who have never seen him perform live, it also gives you an insight into his personality, with his little quips and anecdotes, indiosyncrasies and interaction with the sudience, all the things that remind us that as well as being a top-notch performer and audio artist, he's just a regular bloke like you and me too... something a lot of today's performers try to forget and avoid showing.

This DVD has all of my favourite songs, plus the ever-popular Sadie, The Cleaning Lady on it, which he simply had to sing to shut up an amusingly disruptive element of the audience, one of whom got singled out for a public retort, jmuch to their delight and the amusement of the greater audience. His performance of my all-time Jack classic, Burn for You, was flawless, the man is a genius.

Overall, if you know JF's works from your younger days, and crave some of that again, you had better rush off and buy yourself a copy of this DVD, or his other recent release, Classic Jack - Live while they still have some on the sehlves. If you have never heard of John Farnham and enjoy music this heart, character and spirit, instead of self-agrandisement and rap-style crap, then why not invest a few dollars in this DVD and find out what you have been missing. Unless you have the cultural empathy of roadkill, you'll find something worth listening to.

The Japanese composer Toshiro Mayuzumi enjoyed a distinguished international reputation on a par with that of Toru Takemitsu. Versatile and prolific, he contributed music for films, the theatre and broadcasts. This recording features two of his most rythmically exciting and exotically scored works from the 1960s, the ballad Bugaku, based on ancient Japanese imperial dance, and the Mandala Symphony, inspired by Buddhist teaching. Symphonic mood was Mayuzumi's first orchestral composition, while the colourful Rumba Rhapsody here recieves what is probably its first ever performance.