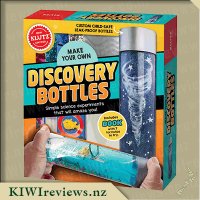 Explore sensory play with these easy at-home water-based bottle experiments! Watch your kid's cares melt away as they're mesmerized by swirling glitter or challenge themselves to tilt a fish through a hoop in the 2 provided leak-proof bottles.

Small Parts - Not for children under 3 yrs.

My nearly 7 year old son is science/experiment mad, he is such a hands on kid and while he may sometimes struggle with some school based tasks like reading or math when there is something hands on to experiment with he finds himself. I knew this Klutz Discovery Bottles set would be right up his alley as soon as I saw it and I wasn't wrong when it arrived he wanted to get stuck into the experiments straight away, as it wasn't a good time to start at that moment I asked him to just have a look through the book until we were ready to do the experiment.

As a reluctant reader being told to look at a book doesn't always go down well but as he had his goal of creating the experiments in mind he studied that book looking at the pictures and diagrams of the instructions and picking up the words that told him what we were going to need to do to make our discovery bottles. For me that is a huge win giving him something to read for a purpose so he sees reading as something positive. The experiments are set out with clear instructions and picture guides to help you do it yourself as well as information about the science behind each experiment so there is learning of the science behind the tasks.

We started off by making the wave crasher, mixing the water and the oil to create a ocean like environment for the the plastic goldfish. he was able to explain to me that oil and water do not mix together so it helps it look like there are waves inside the bottle. This was a lot of fun to make and gave him something to play with afterwards as he tried to get the goldfish to swim through the hoop inside the bottle. I think this was his favourite of the two included experiements as it was like a game afterwards trying to get the fish through the hoop.

The galaxy inside a bottle was also a lot of fun to make we emptied our glitters inside the bottle with the pva glue and water. Reading the instructions it said to use room temperature water so the glue didn't clump and I think our water must of been too cold as on a hot 28 degree day our glue did exactly that so there were lumps of glue and the glitter didn't work as effectively as it probably should of at first. Doing the experiment probably the glue would of mixed with the water to just make a slighlty thicker water which would allow the glitter to take longer to fall back to the bottom of the bottle after being shook. We had some pva glue at home so could add a bit more glue which helped change the water consistency.

The glitter galazy is definitely a great visual experiment and lots of fun to shake up and watch the sequins and glitter float around inside the bottle. My younger daughter thought this was great and played with it watching the glitter while her brother explained to her that the glitter was in water to help it float around. We at this stage haven't tried the other experiments as there are only two bottles included and my son did not want to undo any of his to make the other ones, although I am sure you could do them in any plastic bottles so we will be doing those at a later stage. 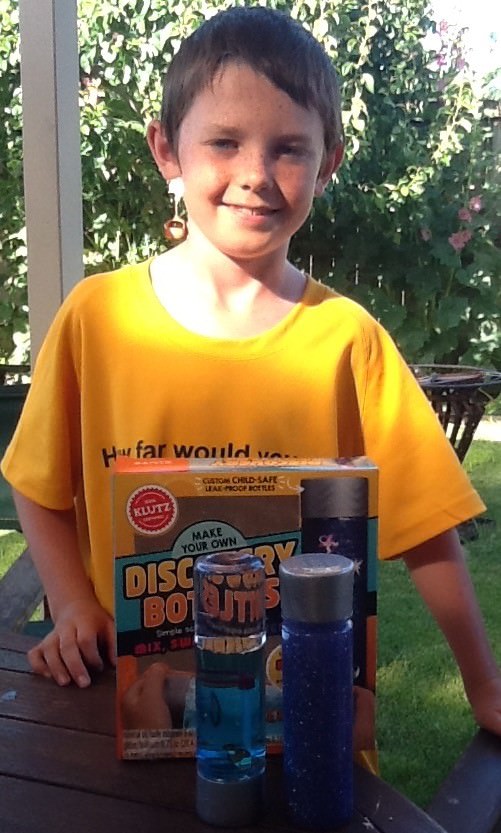 Mr Nine is a compulsive experimenter. He has to know how things work, and spends hours working things out so that he can understand the process. So this was just the product for him! What is more, it was pitched at exactly the right level for someone his age - sufficiently difficult to challenge him, but not so hard that he could not manage without assistance. I hovered while he did his first experiment but found I was not needed (other than to provide lots of encouraging comments!), and after that he went on to try two others entirely on his own.

He did the Tiny Tornado experiment first, and we found it was moderately successful. We had taken all the equipment outside in case of spills, but the day was extremely sunny, so it was quite hard to see the result inside the bottle. When we moved it into the shade, however, the tornado effect was much more apparent. It was useful that the booklet included a page or two of information on the chemistry and/or physics of each experiment as it filled in the gaps for him. He enjoyed sharing what he had learned with the rest of the family as he demonstrated the results of each experiment.

He needed to use the mineral oil for the next experiment - the Wave Crasher. The lid was almost impossible to get off; in the end, his father came to the rescue. It was certainly designed to be inaccessible for little hands. There were safety instructions in several places on the box, the booklet, and the bottle itself warning children about the dangers of this oil when misused. This is timely when there are younger siblings in the house who might investigate it, so we concluded that the lid had been made deliberately hard to remove. Eventually, when he came to use the contents, he found there was too much for the experiment - the instructions said to use the whole bottle, but it would not all fit, so there was some left for another time. But the experiment itself was a great success - much better, in his opinion, than the tiny tornado.

He wanted to do a third experiment but there were only two bottles in the kit. This was a nuisance as he had first to decant the contents of the Tiny Tornado bottle so he could reuse it for the next round. The instructions do warn the child that some items need to be sourced at home for the extra tasks, but personally I would like to see another $5 added to the price of the kit and some spare bottles included. Those that were there were of appropriate quality and were also leakproof - and, of course, they were clean so the experiment was not being contaminated by detergent residue or traces of other liquids.

The third experiment (once he had reclaimed one of the bottles) was the Glitter Galaxy. Having already done two experiments, he finished this one in record time. This and the Wave Crasher now have pride of place on the shelf in his bedroom. He cannot bring himself to discard either of them, so the rest of the experiments will just have to wait until he is able to get some more suitable bottles! Apart from the bottle issue, however, he was very happy with the product and thought it was a really fun way to learn.

Random listing from 'Arts and Crafts'...

Amongst toadstools and pretty flowers, fairies are found!

See the magic grow in your very own fairy garden with this enchanting kit from My Fairy Garden.

Follow the steps on the 12-page, activity guide; adding soil, a little water and dash of imagination to create a beautiful living garden with sparkly cottage, coloured gravel and fantastical fairy figurine.

But be sure to keep the magic alive by caring for and ... more...