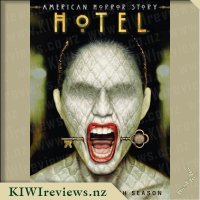 The plot centers around the enigmatic Hotel Cortez in Los Angeles, California, that catches the eye of an intrepid homicide detective (Bentley). The Cortez is host to many disturbing scenarios and paranormal events, and is overseen by its enigmatic matron, The Countess (Gaga), who is a bloodsucking fashionista.

The hotel is loosely based on an actual hotel built in 1893 by H. H. Holmes in Chicago, Il. for the 1893 World's Columbian Exposition. It became known as the 'Murder Castle' as it was built for Holmes to torture, murder, and dispose of evidence just as is the Cortez. This season features two murderous threats in the form of the Ten Commandments Killer, a serial offender who selects his victims in accordance with biblical teachings, and "the Addiction Demon".

American Horror Story is one of those shows that I find myself watching, even though I really don't enjoy horror as a genre at all, but perhaps the fact that you can watch is just fifty or so minutes at a time makes it easier to handle that a full two hour or more film... At any rate, I have been watching these as they air on Netflix and find myself, for the most part, enjoying the twists, turns and reveals that the show has to offer. In Hotel, we get a bit more back story on each of the characters and some of them left me hoping for their happy ending, such as Liz Taylor, my favourite character of this particular season.

As with previous seasons, there are some links to reality, such as the hotel itself with its gory history to some of the characters that appear in an episode or two. We have spurned lovers, double-crossing, a police officer on the verge of a breakdown, a missing child and relationships ending left, right and center and naturally there is plenty of death and blood for those who want a bit of that mixed in with everything. As far as the story line goes, I did find that there were a couple of episodes where I struggled a little to continue, particularly involving Alex and her actions, I would have to say that I liked her character the least, I just didn't feel that she was well written or performed.

This season had some hits and misses for me, I loved Liz, I enjoyed Lady Gaga in her role and thought that she did well and I did enjoy the twist at the end (which did, for me, become more obvious as time went on, but still enjoyed), but there wasn't enough to it to make me rush back to re-watch it.

A stunning television experience of unimaginable scale, From the highest mountains to the deepest rivers it will take you on an unforgettable journey through the Earth's most extreme habitats.

With a budget of unprecedented proportions, photography & specially developed filming techniques, Planet Earth takes you to places you have never seen before, to experience sights and sounds you may never experience again