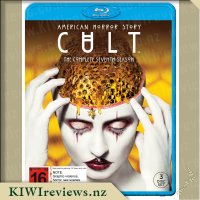 Disclosure StatementFULL DISCLOSURE: A number of units of this product have, at some time, been supplied to KIWIreviews by the company for the purposes of unbiased, independent reviews. No fee was accepted by KIWIreviews or the reviewers themselves - these are genuine, unpaid consumer reviews.
Available:
in stores October 2018

The fictional city of Brookfield Heights, Michigan is left divided by the 2016 U.S. presidential election. Local restaurant owner Ally Mayfair-Richards (Sarah Paulson) is utterly distraught by Donald Trump's victory and several of her longstanding phobias, including coulrophobia, hemophobia, and trypophobia, flare up as a result.

Those close to her, including her psychiatrist Dr. Rudy Vincent (Cheyenne Jackson), question whether the attacks are real or merely anxiety-fueled hallucinations. Ally's paranoia, escalated by suspicious activities perpetrated by new neighbours Harrison (Billy Eichner) and Meadow Wilton (Leslie Grossman), hinders her relationships with her wife Ivy (Alison Pill) and their son (Cooper Dodson). 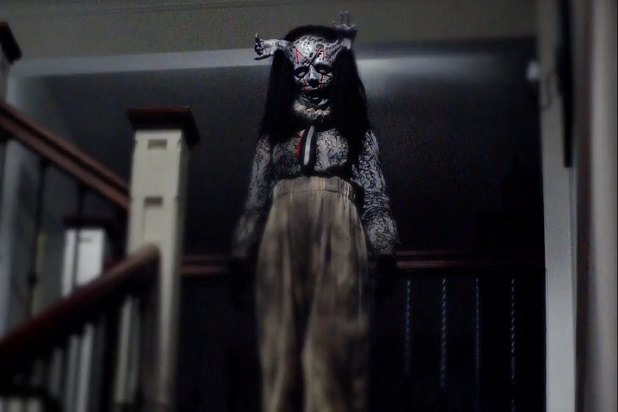 This was a season that really hit close to home. I haven't actually ever watched American Horror Story before, so I had no idea what to expect, but only a few minutes in, and it was obvious that this was going to be a very politicised season, looking at extreme Trump and Clinton supporters following the last American election.

The fact that I felt uncomfortable during most of the episodes really speaks volumes to how strongly grounded the show is. While it has a clear bias towards the Democrats and pokes fun at the Republicans, it is an accurate portrayal of how the media was biased itself ended up giving the "sensible" Democrat supporters the false belief that they held a majority among the voting population, while angering and humiliating the downtrodden lower classes, inciting them to act, and vote Republican in retaliation.

Showing examples of how the status quo can easily push an otherwise upstanding citizen beyond the point of no return, and how easily we can be manipulated by anyone that carries enough confidence and conviction, it really makes you think, and it makes you reconsider a lot of what we believe to be true.

The effectiveness of the show is maintained by the cast. Not a group of super attractive people that are infallible. All people on all sides have their quirks and are flawed people. They feel real to the point that it really leaves you feeling uneasy, watching a group of people that could just as easily be your own neighbours, being tormented in such a way.

The series follows opposing characters Ally and Kai; Ally is played by Sarah Paulson, and Kai is played by Evan Peters. Interestingly, Kai, who plays the lead role of the "cult leader" spends much of his time regaling his followers with stories of other cults, where his role is likened to those of Marshall Applewhite, David Koresh, Jim Jones, and Charles Manson. Even going as far as to compare himself to Jesus. And yet none of that is a cause for concern for any of his followers. His hold on them is that strong.

The season is effectively split into two halves; one of the unknown terrors, the other of inescapable conditions. So while the series starts off quite firmly in the horror genre, it swiftly turns into a political crime drama. Personally, I found the initial half much more enthralling and engaging, with the sanity of Ally constantly being thrown into question. The second act, having resolved that question, instead focuses on how deep the darkness is that sits within each person, and is a much more sobering topic.

What happens when the world humiliates a man? To what lengths will he go for revenge? Who will join his cause? The answers really look deep into the inequalities of the world we live in.

When I first saw tidbits about the new season coming, I do admit to laughing at the information that it would be based around events following the election of Donald Trump as the President of the United States of America. I didn't rush to watch this as I find the whole cult thing to be perhaps a bit more scary as it is such a big reality for people and I was concerned that the series would over-sensationalize cults and whatever story line they chose. Naturally, there is a lot of this that is over the top and true to the AHS universe, but I also found that they did a good job portraying the cult and it felt pretty accurate in the way that people get themselves drawn in, do things they wouldn't have normally done and for some, that desperation to escape the hole they've dug.

The story mostly follows Ally, one half of a lesbian couple who desperately wanted Hillary Clinton to win the election and Kai, who, utterly thrilled with Trumps win, begins his segway into local town politics whilst slowly growing his very own cult, emulating previous cult leaders. These two don't fully run the show though as we have Ivy (Ally's wife), Winter (Kai's sister), Beverly (local news reporter), their neighbours and various other characters who are there often in the background. Paulson does an outstanding job as Ally, a woman who at the start is fearing for her sanity and then becomes that which could topple everything.

The show did well at evenly portraying both sides of the coin, Ally as she looses her mind with everything going on and Kai, both sane enough to get where he wants to go but insane enough to not be tethered by the moral standards of society, and Peters was completely believable as the leader of the growing cult. I did stop watching it about halfway through the season, I'm not entirely sure if I just wasn't quite enjoying it or needed a bit of a break from everything that was going on. But I found, in the end, that the break was well worth it and I got hooked watching the final half of the season.

Some parts of this felt over the top, even for AHS, whilst other parts were so well done that it kept me glued to the screen. I wouldn't say that I enjoyed this, but I can say that I found it mostly well scripted, well acted and stayed true to what AHS is all about. If you've liked the previous seasons then you will like this one.

Your favourite Hi-5 friends are back with another fantastic, playful and musical adventure that will leave you bouncing around with energy!

Let's Play is full of fun ways to stay fit, playful games like giant snakes and ladders and the grooviest ways of making music! Join musical King Xavier, marvellous Moose Kiki and Jaya Peacock on their zany adventures. Be part of the fun as your best playmates in the world Casey, Fely, Lauren, Stevie and Tim put the groove back into playtime! So what are you waiting for? Let's Play!