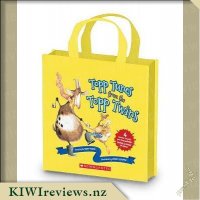 It's a honky-tonk Christmas with the Topp Twins! Carry them home in this handy gift bag and get yodelling! This toe-tappin' gift package includes the hits There's A Hole In My Bucket, She'll Be Coming Round The Mountain, The Farmer In The Dell, and Do Your Ears Hang Low? Illustrations are by Jenny Cooper.

Included in the pack are four separate books plus an accompanying 4-track CD so everyone can sing along.

I have four children and sometimes you never know what will happen when you get products to review but give it a go anyway. This lovely pack arrived in a bright yellow carry bag and inside featured 4 books, I was a little confused to start with as the bag said a cd but I didn't see it in the bag until I noticed that the cd is in one of the books for all the books. The CD says on it which order it sings the books in so you can get the books ready in order for the singing to start. The songs are sung by the Topp Twins who I really enjoy listening to.

My children are 10, 9. 2 and 1 year old and they all enjoyed the songs. The 10 and 9-year-old were able to read and sing along with the books and music. The 2 and 1-year-old loved listening to the songs being sung and the 2-year-old really enjoyed holding the book while it was being done, the 1-year-old was more interested in dancing. The books are all a different colour so for little ones you can ask them to bring the purple book to you, instead of the title.

All the books are great and I love they are a great size for little hands and would be perfect for in the car as well. I will be happy to get a set for my niece for her birthday next year when she turns 1. 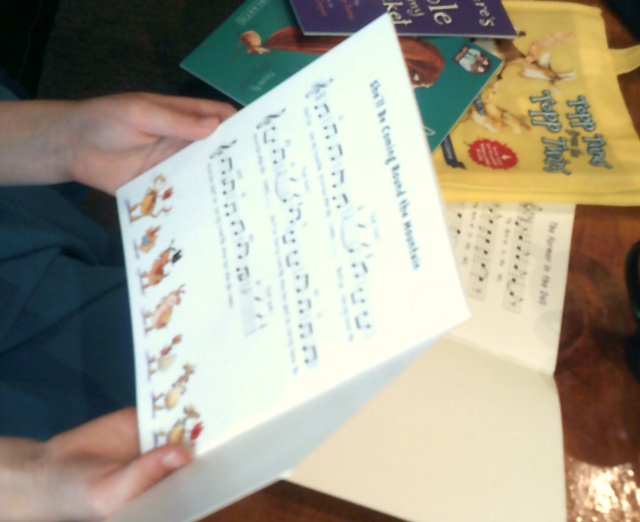 Having looked at all four books and also listened to the CD that is part of the set, I decided that Miss Six was a bit too old for it. However, when I told her I intended to give it to my friend's three-year-old, she reminded me that he and his mother were coming to visit so she was very happy to "help" review it. That worked for me, so I kept the bag aside until the day came when he was to visit. I did refer to it as a play date and was soundly told off; apparently, play dates are only for kids the same age. I have learned something!

When Mr Three arrived, we spread out the books on the coffee table to both children could see the pictures. Miss Six had to be reminded not to be too bossy as she was wanting to choose which one they would listen to first. I had to remind her that the books were for him, not for her, so he should get to choose! However, it was all settled quite amicably as it appeared that they were both drawn in by the bright cover of The Farmer In The Dell, complete with its floppy-tongued goofy hound plucking on his banjo!

We put the music on to play while we followed the story in the book. Miss Six, of course, was able to read the words and sing along, but Mr Three was very happy just looking at the pictures. However, it turned out that he knows the song, so once he realised that he joined in too! Miss Six was fascinated to see that the song was printed at the back of the book as well; she is just starting to read music, but she thought her older brother might be able to play it.

There's A Hole In My Bucket was the second choice. Mr Three loved the pictures of Henry the goat and Liza the duck, and although neither of them was familiar with the song, the constant word repetition meant that it was very easy to pick up so soon they were singing the odd words. This book had appeared to be thicker than the other three, but it turned out that this is the one with the CD included (in its own packet inside the front cover).

She'll Be Coming Round The Mountain was great fun. There were lots of "yee-haa"s from me, and the two children joined in with great energy. The words were slightly different from those I remembered from my own youth, so I kept getting them wrong. Miss Six, who was following the words in the book once she had learned to say "aye-aye-yippee" was quite scathing and ordered me to get it right or stop singing. Mr Three thought that was incredibly funny, so he got the giggles and we had to start the track again from the beginning! This booklet had a printed page of music as well, and this was one Miss Six thought she might manage herself since the notes looked easier.

The last booklet was Do Your Ears Hang Low? It featured lots of different animals with every possible variation of ear size and shape, and at the end of the book was a fun facts section about ears. Of all the books, this was the one both children liked the least. I think it might have been because it was less a linear story and more a series of questions. This preference may change for Mr Three of course as he gets to know all four songs better.

As for the presentation - it is beautiful. The bright carrier bag ensures the books fit into it snugly, and it is just the right size for little hands. Mr Three went home very happy with his new mini-library, and Miss Six has assured him that she will sing them all with him again when she pays him a return visit. I might just go with her!

A cheeky picture book fun from the Minions movie.

What's naughty but nice? Those wicked little Minions. Their appetite for evil is almost as big as their taste for yummy bapples. (But that doesn't stop us chuckling at them.) Now these cute evil monsters need an evil master. Trouble is, their leaders rarely live that long. They've killed Dracula. Napoleon. And lots of cursed Egyptian pharaohs. (They'd be handy in a zombie apocalypse.) Will they ever find their perfect villain?