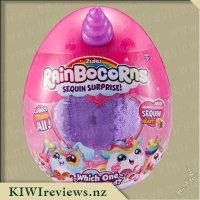 Disclosure StatementFULL DISCLOSURE: A number of units of this product have, at some time, been supplied to KIWIreviews by the company for the purposes of unbiased, independent reviews. No fee was accepted by KIWIreviews or the reviewers themselves - these are genuine, unpaid consumer reviews.
Available:
at retailers nationwide

What surprise is hiding under every Rainbocorn Sequin Surprise Heart?

Every Rainbocorn hatches from its bright mystery egg and has a unique reversible sequin heart that reveals a magical surprise when swiped! All 12 sequin hearts reveal different suprises and are removable, so you can wear them and share them too!

Every Rainbocorn has a fluffy, bright unicorn mane that's fun to brush and groom. Their sparkly horns and butterfly wings add even more magic to every cute creature.

The Rainbocorn collection includes a Puppycorn, Kittycorn, Unicorn, Bunnycorn and Hamstercorn, each with their own sequin surprise. Every Rainbocorn also comes with a little baby Boo-Boocorn, a tiny collectable hiding in a little egg! Can you find the rare TWIN Boo-Boocorns?! 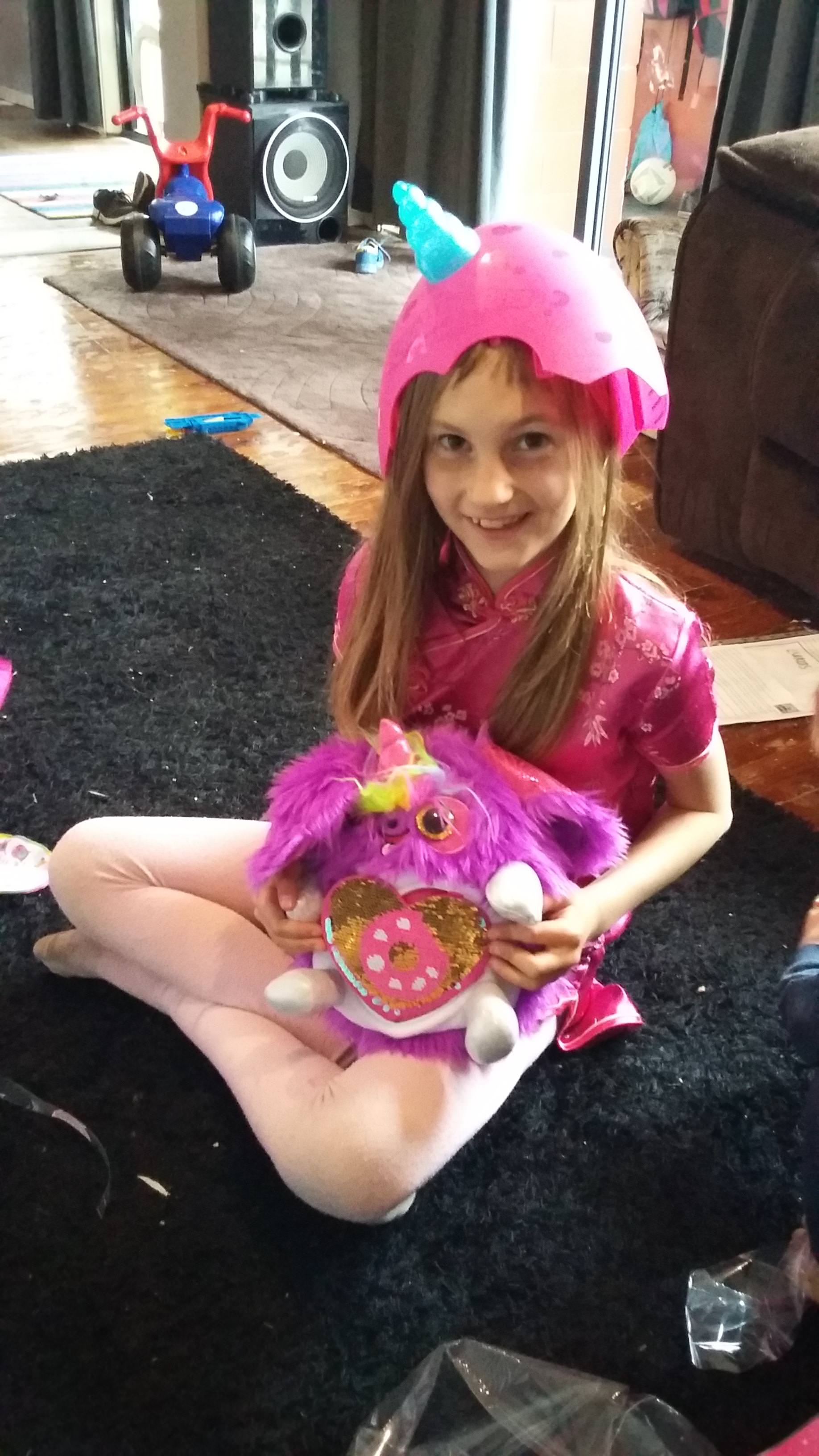 WOW is how I can start this review. I don't think I have seen my 10 year old so excited over a toy, I let her open the box up to find the Rainbocorn. She actually got so excited and let out a yell, once she managed to get the clear wrapper off which proved to be a bit harder as she opened the top bit and it just unwrapped slowly around the egg, then it was another clean plastic to remove after that, which is a little annoying, would of been great with a tear here zip type line as this would work so much better for little fingers and to be honest for adults too, as I couldn't see how to undo the plastic.

Once she got all the plastic off and opened up the egg the sequin heart fell out and she got super excited about it all. The heart is really neat it doubles as a hairclip or the heart of the Rainbocorn, it moves up and down revealing a picture and then back to nothing, my daughter loves this as it works well with her sensory issues. The heart was a little big harder to get onto the rainbocorn but she got there in the end. The eggshell that it comes in makes a great hat, and also something great to give to younger siblings to keep them away from everything else we are playing with.

While the little ones were enjoying the shell, miss 10 was admiring the small egg that was inside the big egg. It the blurb and on the plastic says "Can you find the rare TWIN Boo-Boocorns?!". In the little egg Miss 10 got were two boo-boocorns, she was super excited to read they are rare and these are taken care of very well having to sleep in the big egg.

Even though cuddly toys are a I love this so much toy to a I have forgotten about it put in the back of the toy shelf kinda toy. The rainbocorn actually sits on her bed, and she plays with it a fair bit, it has its own bed in the cupboard (open plan living lol no doors on it) where she can see her from her bed. She even shares rainbocorn with her 8 year old brother who was very upset he didn't get one too, and her 1 year old sister, who just adores cuddling rainbocorn, 2 year old isnt interested at all.

Its a very cute toy, prob not something I would buy for my older child but maybe for a younger child about 5/6 years who might play with it a little more, in saying that my daughter really does enjoy it. The price isn't too bad. 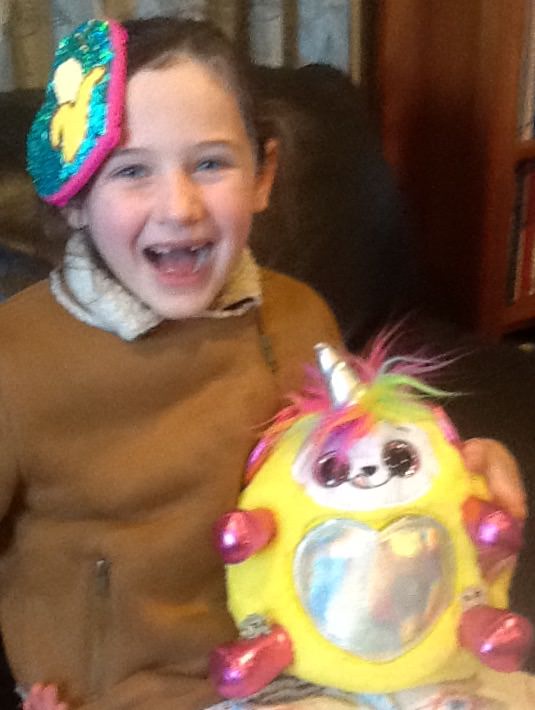 Miss Six was overjoyed when I told her she was going to review a special new toy with me. She loves her dolls and other cuddly toys, and rarely leaves the house without at least two of them in tow, so she was delighted at the prospect of a new one. Her brother, Mr Eight, was intrigued too so he offered to oversee the process as she unpacked her new rainbocorn.

The packaging proved quite a challenge - the transparent wrap covering was difficult to get off, so Mr Eight came to the rescue. With his help and the careful use of a pair of scissors, the outer cover was removed and Miss Six was ready to open the rigid plastic inner "egg". This was much easier. She pulled the two edges apart and the entire container burst open, releasing the rainbocorn inside. Miss Six squealed and picked it up to cuddle it; meanwhile, Mr Eight was detaching the sequin heart and examining the clip on the underside. He showed her how she could wear it in her hair as a decorative clip!

Next, Miss Six located a tiny egg in the base of the large eggshell, and found that it had twins inside it. Mr Eight told her she was very lucky because apparently they are quite rare. We had found, by reading the pamphlet included with the toy, that her rainbocorn was a monkeycorn named Loco. We also followed the "secret clue" inside the sequin heart, and discovered that Loco's two boo-boocorn babies were monkeys. Miss Six could not think of suitable names for them so she decided to address that later.

One of the fun activities you can do with these toys is to comb their hair and decorate it. Miss Six attached a ribbon to it and thought it looked quite jaunty, then she tried clipping on the sequin heart but it was a bit too big so she put it back in her own hair. Like many small children, she loves playing hairdresser: she has several dolls with long hair and has great fun brushing it and adding different decorations. Mr Eight was more interested in the monkey twins; he discovered that he could attach them to the ends of a couple of pencils, and asked if she really wanted to keep them as well as Loco. She was quite definite on that one - he could borrow them, but had to put them back afterwards.

I was pleased to see that the toy has a large label on the side warning of the dangers for very young children - sequins are not suitable for little mouths, and even the boo-boocorns are quite small and could find their way into a young child's mouth. Miss Six assured me that she was quite safe around such things, and she thought it was just right for someone her age. Both children had lots of fun stroking the sequins up and then down again to see the pattern emerge. It was quite compulsive - in the end I gave in and had a go too!

Over the next couple of days, Loco and her two babies were well played with. They were introduced to Miss Six' friends, and travelled to an aunt's home with the children in the back of the car. Miss Six is very careful with her toys, so she was disappointed when she found that the horn had partly detached from the top of Loco's head. I checked it for her and it appeared that it had not been attached firmly enough. All the other protuberances - tail, wings and legs - were very well secured. This was disappointing for her; I was able to mend it, but it did make her sad for a time. Since the toy is marketed as having a mane that is fun to brush and groom, it is important that this is the most durable feature of all.

Other than that one little mishap, however, Miss Six is over the moon about her new friend. It sleeps with her, watches her from a garden chair when she is on the trampoline, and accompanies her on trips in the car. When she needs to leave it at home, she places it in its own egg and waves goodbye as she leaves! The twins, meanwhile, have their own little place on a shelf in her bedroom. As Miss Six says, they are too little to go out in the car in case they get lost!