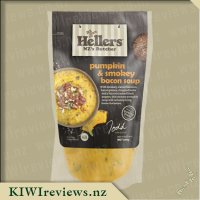 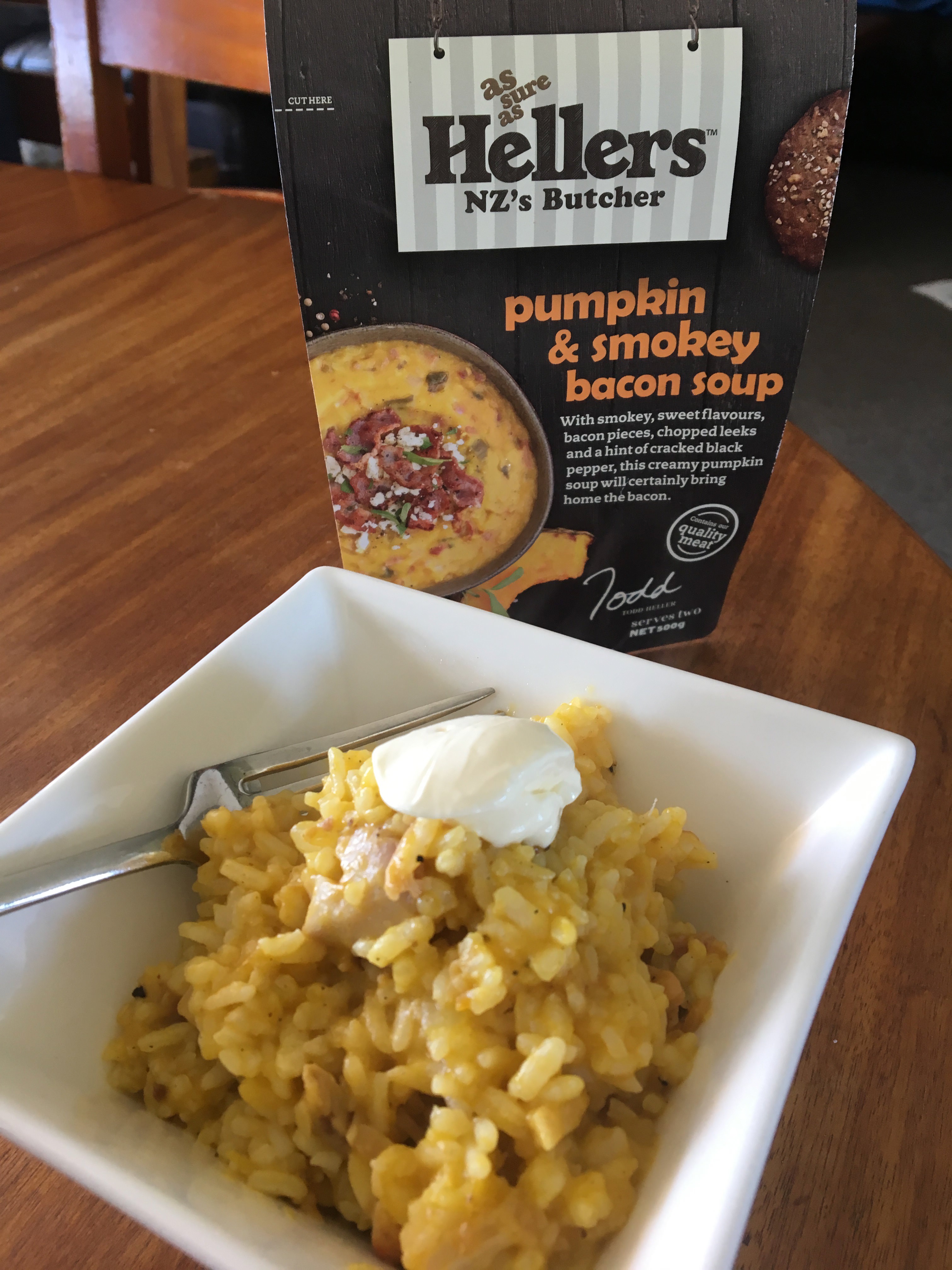 I am a bit fussy when it comes to pumpkin soup and I was interested to see if Hellers Pumpkin & Smokey Bacon Soup would meet my standards. I should point out that my pumpkin standards are not really relating to the quality of the soup but rather to my own personal preference for taste and texture.

I was expecting a strong smell of bacon when I opened the packet. I was surprised that it didn't have such a strong smell. The words 'smokey bacon' in the name of the product are what really drew my attention to the pack in the first place so I was a bit disappointed with my initial experience of it.

We started with the traditional way of using the soup....simply heated and served. The soup was nice and creamy and had obvious pieces of bacon, leek, and onion. When I poured the soup into a microwavable container, some of the contents didn't pour out. I used a bit of water to rinse the last bits out as I don't like to waste anything. A quick swirl sorted it out. When we poured the soup from the microwave jug into the cups to serve, we found that the soup had a nice pouring consistancy. This is another soup that the kids weren't interested in but they did look over my shoulder while I was trying it and pointed out that they could see onions and "green stuff"! A quick check on the packet identified the "green stuff" for us as being leeks. These are the sorts of things that impress my husband and me but put the kids off. I found that the soup was too rich and also too salty for my liking. I wouldn't be able to eat too much of the soup in a sitting because of this. With other soups in the range, I could eat a much bigger serving without feeling overwhelmed with the rich flavour.

We thought that we would think outside the box on this one and added some of the soup to some left over rice and chicken. We were a bit disappointed by this mix as it didn't have too much flavour but seemed too rich and sweet. Oh well, a good idea but not the best result!

This soup will appeal to some but not others. I am not one of the people it is aimed at I guess and unfortunately, neither is my husband. This isn't a soup that our family will buy again. 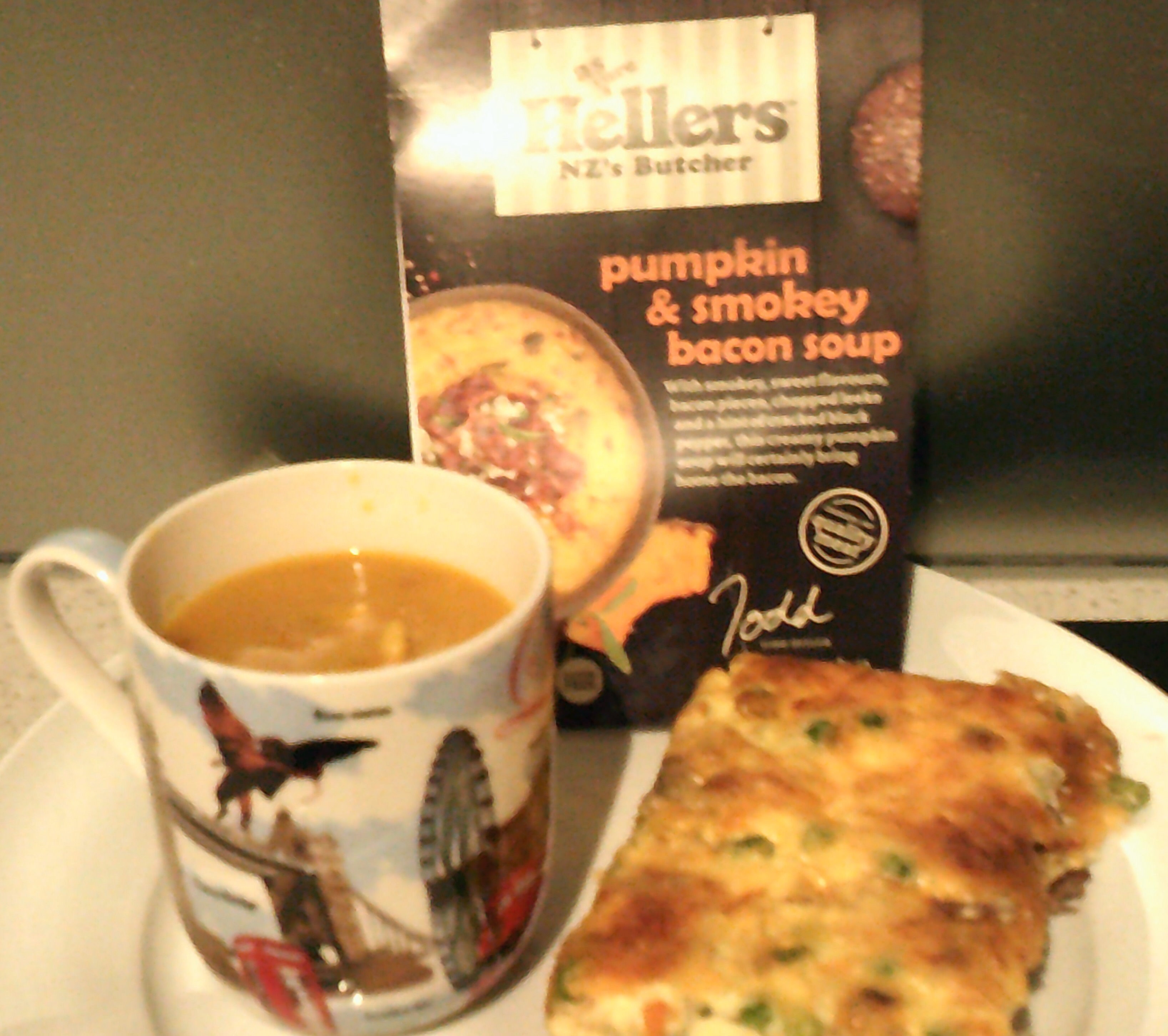 We had a large amount of leftovers - cooked vegetables, rice, and Louisiana style beef - but not enough for a meal for one adult and one teenager with hollow legs, so I decided to use everything up in a quiche and have it with the soup instead of bread. Together these items would make a hearty meal which would be plenty for both of us. I love pumpkin soup at any time so this would be a treat, and very quick to prepare! As I was planning to go out, I cooked the quiche in advance so it would just need reheating on my return.

When I removed the soup from the packet to heat it, I was amazed at how thick the contents were. I could see generous chunks of bacon and pieces of vegetable as well, so this was not a soup with token additives; this would be a real heavy-duty soup fit for a cold winter's night. I did think that two portions per packet might not be realistic as Mr 15 could probably have eaten the lot by himself, but the packet did suggest that it should be served with a bread roll (or, as in our case, something else along the same lines).

We were both very hungry - he had come from a long, hard sports practice and I had just returned from an eight km walk in the rain and wind - so we ate fast without any discussion! Once we had finished, however, I asked him for his impressions. He said that creamy soups are not really his thing although he had enjoyed this one: I think the pieces of bacon were what did the trick as they were large and chewy. He had also enjoyed dunking his quiche into the soup, and by the time he had finished the soup mug was wiped clean!

Creamy soups are quite another thing for me, and the creamier the better. I make my own pumpkin soup when I have time, but this was as good if not better than any I have made. It had that real home-made flavour and consistency, and just the right combination of spices to enhance the vegetable flavours without overwhelming them. I think this is probably my favourite of all the Heller soups I have reviewed so far.

Having tried this product as a straight soup, I would like to try it next time with added bacon and serve it in a bread bowl. I have made this dish before with a melted cheese sauce, but have always found it too rich. Having a pumpkin and bacon filling instead would be a tasty variation on the original, and I can just imagine the bread crusts dipped into the pumpkin. It is always a messy process eating this sort of meal, but totally worth it! I mentioned the idea to Mr 15 and he was 100% in favour of that idea.

Heller's is a favourite brand in our household we buy everything that Heller's makes from sausages to bacon. Soup is something that we often enjoy eating over the Winter month's, however, a good soup is hard to find and my soups never taste any good really when even I attempt to make one from scratch so you can imagine my joy to see and hear that Heller's have now released their own range of soups YUM!!!

One of the soups which I was lucky enough to get a sample of for review was the Pumpkin and Smokey Bacon. I love pumpkin soup, it has to be up there as one of my favourite flavours as it always has the smooth creamy, yet a mild taste of roasted pumpkin which makes is a real Winter warmer, and bacon well who doesn't like bacon? In my house bacon goes with everything I can possibly think of, so having a soup based around Pumpkin and bacon was surely going to be a winner right? The first thing to catch my attention was the pouch which the soup came in, I loved that it was in a see through plastic pouch which meant that I could see the exact contents that it contained, and also how it had the ability to stand upright which meant for easy storage in the fridge. The label was eye-catching and would stand out in a supermarket chiller easily, the colours used were effective and I loved that the list of ingredients on the back of the pouch were ones which you could easily find in your own home and identify with.

Opening the pouch I tipped it into a pot to heat over the stove, I was impressed by the thickness and creaminess of the soup and was delighted to see the many large chunks of bacon and vegetables within, this told me this was definitely a top quality soup. Within 10 minutes the soup was heated perfectly, piping hot and ready to enjoy, I served this up with some buttered toast and added a dollop of sour cream to both my partner's and mine soup after it had been dished up. The soup was delicious I loved how it had a beautiful pumpkin flavour to it, but what made the soup standout was the bacon which provided a beautiful smokiness to it and a lovely meaty flavour, the 2 flavours combined were to die for. My partner even loved the soup and said I should buy more of it and he's not even a pumpkin fan.

This soup is one of the best you can buy if you're after a soup full of flavour with lashings of bacon this is the one for you, 10/10 for me and at such a great price for 2 serves you really can't go wrong. 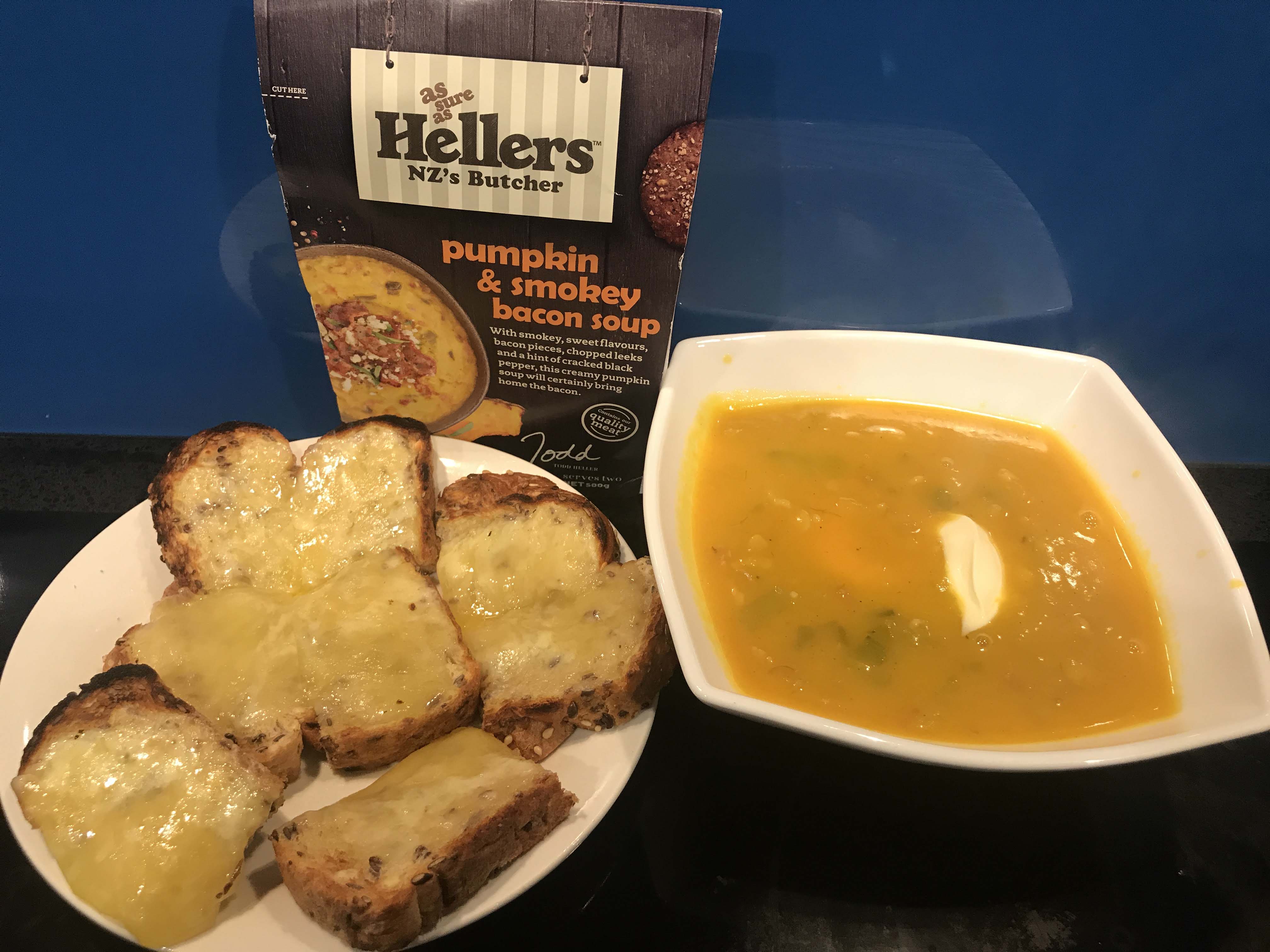 Soup is one of those meals that is perfect for the cold winter weather and this is exactly how I found myself purchasing a packet of Heller's new soup range, specifically the Pumpkin & Smokey Bacon flavour. I chose the Pumpkin & Smokey Bacon flavour because Pumpkin is one of my favourite soup flavours and reminds me of something warm, like freshly roasted pumpkins straight out of the oven and what doesn't bacon go with, this had to be good. I'm a big fan of all of Heller's other products and I love to try new things so when I saw these in the chilled food section with all the other fresh soups at the supermarket, I thought "What the heck" and grabbed a packet for dinner.

Usually I avoid most chunky soups because you can never really tell what the chunky things are supposed to be but with this Pumpkin & Smokey Bacon soup you can very easily tell what each mouthful contains based on the look, texture and the flavour. This is seriously unheard of with every other chunky soup I've ever tried and was a huge plus for my husband and me. My husband even commented saying that this was probably the best soup he'd ever tried.

We decided to serve our soup with some cheese on toast this time but usually we use toasted garlic pita with cheese melted inside. We also added a big dollop of creme fraiche, which also tastes amazing. While the soup was absolutely delicious on it's own, these two additions made it to die for. Since it was so good, my husband and I have made it a regular meal in our home and have it at least once a fortnight. We haven't tried it on the kids yet mainly because we want to be selfish and have it all for ourselves but also because I suspect they wont enjoy it as much as we have with the chunky food, even though they can see what it is. One day I'll work up the courage to let them try some and I'll be prepared to finish any of their leftovers too!

Now that I know I like the Pumpkin & Smokey Bacon flavour, I think we'll be trialling the other flavours over the next few weeks to see if they are just as good. I'm especially interested in the Roast Chicken & Bacon flavour. Yum!