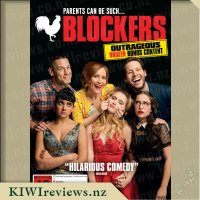 When I received the Blockers DVD from Universal I was quite excited, as I had not got around to seeing this at the movies and thought it looked quite funny. As well as that, I have just a little crush on John Cena from the days of watching wrestling, and find him a fun actor to watch. I did not really know much about the producers and director - but found out that Kay Cannon wrote the Pitch Perfect movies, and as for Seth Rogan and Evan Goldberg - I know they are both actors that have worked together a few times to direct films.

Although I do not yet have children that are high school age, as every parent knows - kids grow WAY too fast, and I am sure before I know it my three kids will be talking about formals (proms) and boyfriends/girlfriends, and I will be having the "please, whatever you do - do not make me a Grandma too young" talk (aka - kids hijack any semblance of normal once they arrive!!)

The movie itself centres on three teenage girls (Julie, Kayla and Sam) who met in their first year of school and have been besties since then, right through to their now last year of high school, and their upcoming prom. Julie's Mother (played by Leslie Mann) comes across a conversation between the three girls, full of symbols and emojis and together with the other two parents (John Cena and Ike Barinholtz) figures out that it is a pact to lose their virginity. Understandably, the parents are not to happy and set out to stop their "little girls" going through with it.

Without revealing the whole storyline and ruining it - what follows is a somewhat funny, sometimes cringe worthy, but always light hearted sex comedy that takes an old issue but adds a more modern twist - with single parents, divorced families, multi ethnic unions and some very open minded ways to raise parents, as just some examples.

I did enjoy the film and did not find that it was totally predictable, which was great, however it really did not hit all the right keys for me - and left me feeling that it really could have been better. Funny - yes, some bits. Worth watching - yes, but do not think I would bother to see it again. Would I recommend it - yes - as a light hearted, do not have to think too much movie, absolutely. Thanks Universal and KIWIreviews for the date night film for hubby and I!