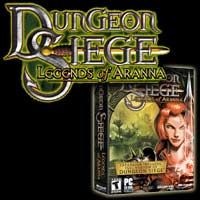 Legends of Aranna will also introduce new spells and special over-the-top spell effects to combat fierce new creatures such as Clockwork Beasts and Doppelgangers. Those not content to play a standard farm girl or farm boy will be able to choose a new half-giant player character; and even use spells to transform into a wolf, lava monster or troll. Players will be able to collect rare and powerful treasures, including new consistent styles of armor sets and collectables. Also available is a new pack animal that will defend the player's treasure to the death.

- All-new campaign. Journey through nine spectacular areas, including an all-new jungle region, as you unravel the rich history and mystery of the world of Aranna

- Even more intense battles. As you adventure through Aranna, you'll encounter previously unseen creatures to battle, including the reptilian Zaurask and the catlike Hassat

- Cooler treasures. Discover rare and powerful treasure sets among the spoils of battle that, when combined, grant the owner new and wondrous abilities

Communicating a specific word, item or object to your team-mates by giving verbal clues is easy, but when you are against the clock, and most of the words you would like to use are forbidden, it is not as easy as it might at first seem.

How on earth do you communicate 'Pizza' to them if you are forbidden from using the words 'fast-food', 'cheese', ... more...