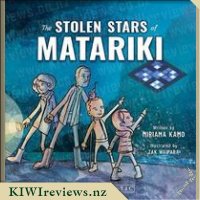 "Pai kare!" Grandma exclaimed. "What's happened to Matariki? There are normally nine stars, but tonight I see only seven....'"

When Grandma and Poua take the children eeling one magical and wild starry night, they discover two stars missing from the Matariki cluster. Have the patupaiarehe been up to mischief again? 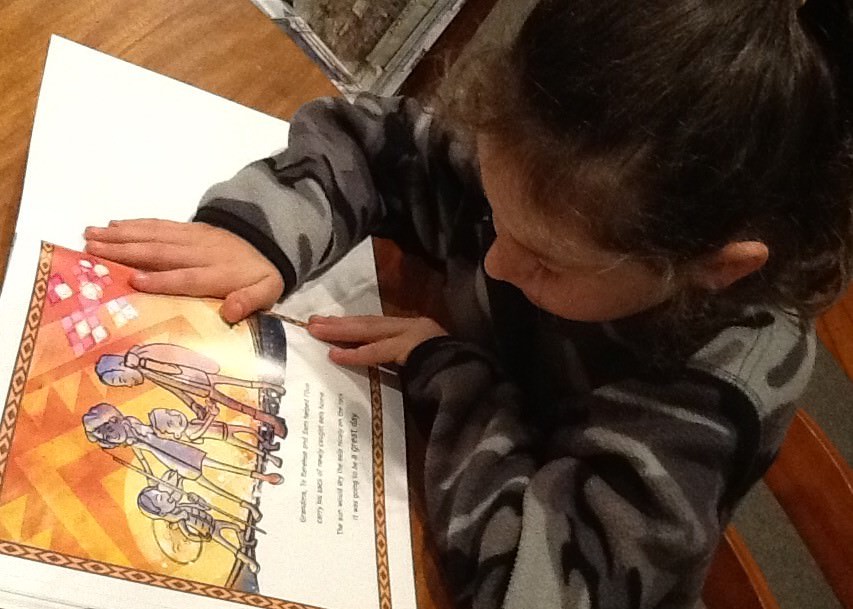 I had already read the Maori version of this book with two of our boys, and had taken it away again temporarily so that I could review it before returning it to them, so I still had it in my bag when I gave this version to Miss Six. She was very excited to hear that there were two different copies, and asked if I could read her both versions as she is learning Maori at school and wanted to see how much she could understand.

We compromised. We read the English version first, with her reading some of the text herself, but with me taking over when she was struggling. There were several Maori words included; some of them she already knew, like "oma" and "pai kare", but all of them were translated at the foot of the page where they first occurred which both of us appreciated. By the time she had encountered "patupaiarehe" several times, she was able to pronounce it without difficulty and had great fun asking her brother if he knew what it meant.

Miss Six just loved the story. She got quite indignant at the way the naughty patupaiarehe stole things that did not belong to them, and said they should have been satisfied with what they were given. She did point out that they could always go without any clothes at all as some fairies do, but then conceded that they might get cold so maybe they could get some wool or cotton - as long as they asked for it nicely!

We talked about the different stars in the Matariki cluster. In other versions of the story there are seven stars, but this time there are nine. Miss Six thought that might be because the two that were stolen, Pohutukawa and Hiwa-i-te-Rangi, might have been smaller than the other seven so people did not always notice them. And if they were smaller, that would have made it easier to steal them, and for Poua to throw them back again. Whatever the reason, she was pleased that the story ended happily. She was also gratified that the children were resourceful and played a good trick on the patupaiarehe.

After we had finished the book, I kept my promise and read her the Maori version. The text is faithful to the original and the pictures are identical, so this made it easier to follow. I stopped at the end of each page to check that I had not lost her, and was reassured to discover that she had little difficulty following along even if she did not understand every word. It is a wonderful way to ease a child into using another language naturally.

Finally, I asked what she thought of the experience. She said she had enjoyed both versions of the book but what really stood out for her were the pictures - they were colourful and vibrant, and really hooked her in. No doubt this will be another book that will be well read. I suspect she will be sad that she cannot keep both copies, but the boys are anxious to get theirs back now that the review is done. Meanwhile, she has decided we should go eeling!